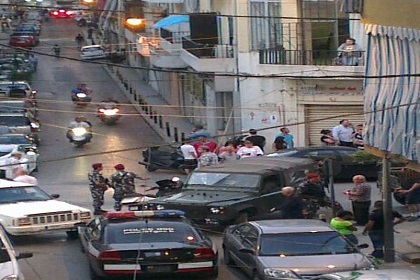 A security plan set to be enforced in the capital Beirut will include the area of Bourj Hammoud, media reports said on Sunday.

An Interior Ministry source said in comments published in the pan-Arab daily Asharq al-Awsat that “the official security plan set to be implemented in Beirut will include Bourj Hammoud, which is considered part of the capital.”

The plan will be implemented in the area “regardless of the number of wanted suspects there.”

The source stressed that the decision was taken ahead of the recent clashes that erupted in the area.

“The security plan will include all areas in order to maintain security on all Lebanese territories.”

On Friday night, a clash erupted between an armed group and a number of residents in the al-Nabaa neighborhood in Bourj Hammoud area, prompting the intervention of security forces.

Clashes and security violations are common in al-Nabaa, which is confessionally and politically mixed.

Recently, Interior Minister Nouhad al-Mashnouq said that a security plan for Beirut is expected to witness light in June.

The army and security forces have already implemented a security plan in the northern city of Tripoli and the eastern Bekaa Valley, arresting scores of gunmen and members of gangs involved in car thefts and kidnappings in return for ransom.

But come on... The illegalities there there are minute compared to dahieh