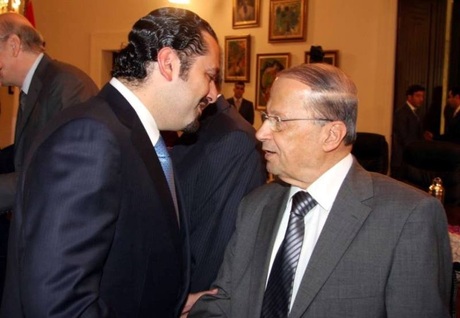 On Saturday, al-Joumhouria newspaper reported that the Christian leader may travel to the French capital Paris on Tuesday to meet with head of al-Mustaqbal Movement Saad Hariri.

Sources told the daily that the “dialogue between the Mustaqbal Movement and FPM will resume openly soon.”

The resumption of the talks between the two sides will not necessarily mean that the Mustaqbal Movement will endorse Aoun's nomination for the presidency, added the sources.

The FPM chief has announced that he would only run for president if he was presented as a consensual nominee, particularly eying the support of the Mustaqbal Movement.

Hariri and Progressive Socialist Party leader MP Walid Jumblat agreed on Friday during a telephone conversation to hold a meeting in the near future.

The trip will take place, he will sneak from the back door straight into Saad's private plane, wala min sheef wala min deri.

The last time Aoun asked for and got to meet Hariri in Paris he had Hariri pledge to keep the meeting secret. Aoun then also denied that the meeting took place even after Al Akhbar insisted that it did.