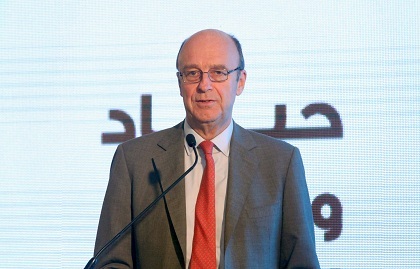 U.N. Special Coordinator for Lebanon Derek Plumbly warned that the vacuum in the presidency would impact the international community's trust in Lebanon.

In remarks to As Safir daily published on Monday, Plumbly said: “We've seen a tangible progress in the formation of Prime Minister Tammam Salam's government and the implementation of the security plan.”

“We've also felt a considerable change in the security atmosphere due to the understanding between the political leaders,” he said.

But the diplomat reiterated his call for the immediate election of a new head of state, saying “We are concerned that the vacuum in the presidency would impact trust in Lebanon.”

Plumbly spoke to As Safir on the eve of a conference in Rome in support of the Lebanese army.

Tuesday's conference will bring together the representatives of 40 states and international organizations.

Despite his warning of trust, Plumbly said support to the army has so far not been affected by the failure to elect a president on time.

The Rome conference will be an opportunity to study the additional needs of the army, he added.

How does Plumbly expect Lebanon to elect a President when the kingdom of terrorism keeps interfering in Lebanese affairs?

Karim. How is the kingdom of terror stopping aoun and HA from attending the parliamentary election? Aoun has as much right to nominate himself for the presidency and he has 6 years to put together a plan, negotiate with Hariri and prepare for the election. The fact that time has come and past and he is still trying to convince people of his credibility all the while obstructing the elections is pathetic and indicative of the mans character. No body interfered with him from laying his platform and alliances over the six yr period not even the kingdom of terrorism it is due to his own incompetence we appear to be without a head of state while he makes lebanon wait for him to be ready.