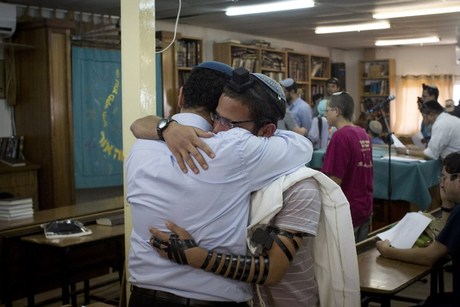 The uncle of a missing Israeli teenager made a heartfelt plea for "mercy" to his suspected kidnappers Monday, after the family spent a fourth sleepless night worrying for his safety.

Naftali Frenkel, 16, who holds joint Israeli and U.S. citizenship, is one of three teenagers Israel says were kidnapped last week from the southern West Bank by militants from the Islamist Hamas movement.

On a leafy residential street in Nof Ayalon, a small town some 20 kilometers (12 miles) northwest of Jerusalem, police and television cameras vie for space outside the Frenkel family home.

"I'd just like to send a message to anyone who listens... about human mercy, about a belief I think all of us share in God above... (and) mercy to young children," Yishai Frenkel told Agence France Presse.

"The abduction of 16-year-olds is a terrible crime," he said, standing outside the family home.

"There are lines that should not be crossed."

Israeli Prime Minister Benjamin Netanyahu has said he holds Palestinian president Mahmoud Abbas, who recently signed a unity deal with Hamas, responsible for the safety of Frenkel and the two other missing youths: Gilad Shaer, also 16, and 19-year-old Eyal Ifrach.

Outside the Frenkel house, local teenagers hung up a banner bearing a passage from the Bible in Hebrew: "Your children will return to their own territory."

Taken from Jeremiah 31:17, the verse has been used by the press to coin a codename for the massive manhunt -- "Operation Return Our Children".

Underneath was written: "Frenkel family, we support and embrace you, and await Naftali's return," painted in green letters.

"We really want to see a quick and healthy, peaceful resolution of this situation," said the uncle, in his mid 40s.

Frenkel said the family first realized Naftali had gone missing early on Friday and has slept very little since then.

"We learned about it in the pre-dawn hours of Friday morning. It appears to be most likely an abduction," he said.

Visitors and well-wishers were coming and going at the home under the watchful eye of police. Neighbors said they had been told not to talk to the press.

"The house is full of army and police and everybody's working together," said Yishai's wife Ittael.

"We all love him, we miss him. This should be a time of mercy, and that's what we're hoping for."

The three teenagers were first reported missing late on Thursday but so far there has been no formal claim of responsibility.

Israel has arrested more than 150 Palestinians in one of the biggest sweeps in recent years, with the searches focusing on the southern West Bank city of Hebron and the surrounding area.

The teens' disappearance has captured the hearts of the nation, with some 20,000 Israelis pouring into the Western Wall plaza in the Old City of Jerusalem -- the holiest site at which Jews can pray -- in a mass prayer late Sunday for their safe return.