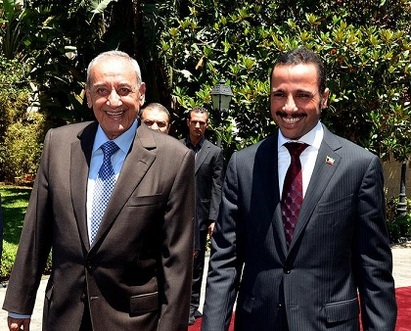 He stressed: “Kuwait will never abandon Lebanon under any circumstances.”

He made his remarks during a luncheon banquet thrown in his honor by Speaker Nabih Berri.

Addressing the case of Syrian refugees in Lebanon, he commented: “We have witnessed firsthand the suffering of the displaced, who are posing a major economic burden on Lebanon.”

“Lebanon is being made to support a burden it cannot withstand,” noted the Kuwaiti official.

For his part, Berri thanked Ghanim for his country's support to Lebanon and its sponsoring of a donor conference for the Syrian refugees in Lebanon, while highlighting the role of the Kuwait Fund and Gulf Cooperation Council in this issue.

Ghanim had arrived in Lebanon on a two-day official visit on Sunday.

He paid a visit on Monday to various refugee encampments in the eastern Bekaa region.