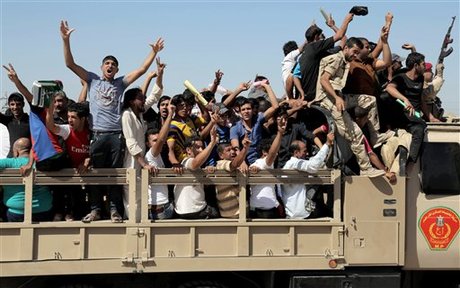 Iraqi Shiite volunteers, who had been fighting in neighboring Syria, have been heading home to battle an offensive that has brought militants to near Baghdad, a monitoring group said Tuesday.

Thousands of Iraqi Shiites had flocked to Syria to fight alongside President Bashar Assad's forces against mainly Sunni rebels.

Many volunteered to defend the Sayyida Zeinab mosque, a revered Shiite shrine in southeast Damascus, from rebels based in the outskirts of the Syrian capital.

But as Sunni Arab militants swept up a large chunk of northern and north-central Iraq in a lightning offensive over the past week, the volunteers have begun heading home in response to a rallying cry by top Shiite cleric Grand Ayatollah Ali al-Sistani.

Their positions were taken over by fighters of Hizbullah, which has also intervened heavily alongside Assad's forces in Syria's civil war, Observatory director Rami Abdel Rahman said.

"The Iraqi pro-Assad fighters' pullout from the Mleiha area was accompanied by a relative lull in the fighting around there," he said.

"But that does not mean the regime has been left defenseless, as Hezbollah has deployed new troops to fill the gap."