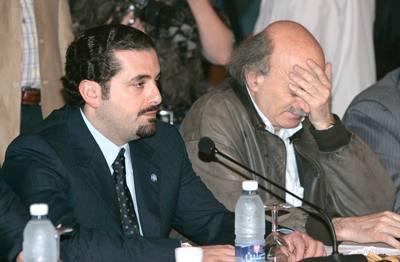 The much-anticipated meeting between Progressive Socialist Party leader MP Walid Jumblat and al-Mustaqbal head MP Saad Hariri in the French capital Paris is not expected to resolve the presidential deadlock.

An Nahar newspaper reported that the meeting, which was expected to be held on Tuesday was postponed to Friday.

The newspaper, published on Wednesday, said that Hariri will host a dinner banquet in honor of Jumblat.

The two officials, according to the daily, will tackle the presidential crisis and ways to resolve the political impasse.

Sources underestimated in comments to al-Joumhouria newspaper the importance of the meeting with the ongoing sharp differences over the name of the presidential candidate.

The sources said that the obstacles impeding the election of a new head of state are not in the hands of the two officials.

“Neither Hariri nor Jumblat have a final position on the consensual candidate who would be able to garner the majority of parliamentary votes.”

Jumblat traveled to Paris on Friday on board a private plane as media reports said that the Druze leader will also meet with former President Michel Suleiman.

Lebanon was plunged in presidential vacuum following the end of Suleiman's term on May 25.

Five presidential election sessions were held, but parliament has so far failed to elect a new head of state.

This is not true. If Jumblatt would withdraw his nominee, Helou and Mustaqbel would move to another candidate that Jumblatt supports, then the thing could move. It would at least put pressure on the FPM Deputies to stop boycotting if there were a jelling of positions between M14 and Jumblatt.

real question is : why did m14 not back helou ?

because he was appointed by Jumblatt, not by the christians

My brother recommended I would possibly like this web site.
He was once entirely right. This post truly made my day.
You can not believe simply how much time I had spent for this
info! Thanks!