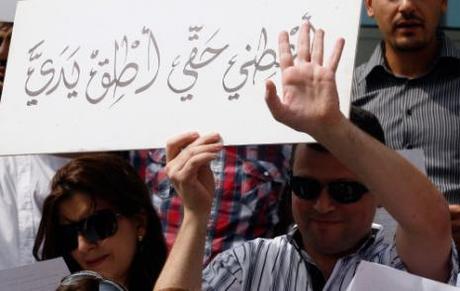 Resolving the dispute over raising the Value Added Tax is among the main obstacles that may hinder the approval of the new wage scale during a legislative session scheduled for Thursday.

Given the lingering differences, the session may not even be attended by the Mustaqbal bloc, which may lead to a lack of quorum at parliament.

Head of the Mustaqbal bloc MP Fouad Saniora had held talks Wednesday with Speaker Nabih Berri regarding the session, saying afterward that talks over the wage hike “need more time.”

Meanwhile, the Syndicate Coordination Committee warned that it may resort to “escalatory” measures in the future should the legislative session fail to adopt the new wage scale draft-law.

“We will head to the streets whether Thursday's legislative session is held or not,” declared Head of Public Secondary School Education Teachers Association Hanna Gharib during a press conference.

He slammed the potential raise in the VAT, saying that it will result in a decrease in spending by the poor and people of limited income.

Raising the VAT has been among the proposals sought to resolve the problem of funding the new wage scale.

“We are waging this battle in the name of all Lebanese,” said Gharib.

“We reject the approval of a wage scale that takes place at the expense of the poor and those of limited income,” he added.

“Our rights will not be subject to any settlements or concessions,” he stressed.

Moreover, he remarked: “We are not bound to any of the discussions among the parliamentary blocs because they did not even consult us in their talks.”

In the meantime, concerned ministers and lawmakers held a series of meetings at parliament ahead of Thursday's legislative session.

Change and Reform bloc MP Ibrahim Kanaan announced during a press conference: “We reached a balance between revenues and spending in the new wage scale.”

“The balance leaves no room for differences over the figures and it will not negatively impact the economy,” he explained.

“Today's talks ensured the rights of the concerned sides in the wage scale,” he revealed.

He remarked however that an agreement over the wage hike has not been reached yet as differences over its funding still remain.

“We have achieved progress, but discussions, particularly over the funding, are still open,” he said.

“We hope that the new wage scale draft-law will be approved on Thursday,” he added however.

Education Minister Elias Bou Saab later added at the press conference: “We hope to reach an agreement over the wage scale soon.”

“Saniora has not said that he opposes the hike, but rather he advocates it,” he stated.

“We hope to reach an agreement soon otherwise we risk wasting all the progress we have achieved so far,” warned the minister.

The SCC, a coalition of private and public school teachers and public sector employees, have been holding onto a 121 percent increase in their salaries. But a ministerial-parliamentary committee has proposed to reduce the total funding from LL2.8 trillion ($1.9 billion) to LL1.8 trillion ($1.2 billion).