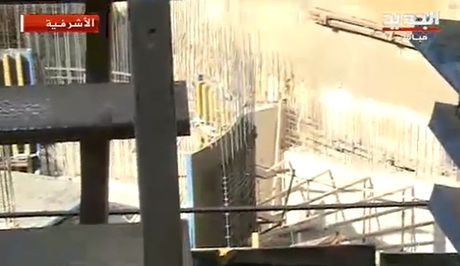 One person was killed and three others were wounded on Wednesday afternoon when the wall of an old building collapsed in the Beirut region of Ashrafieh.

Internal Security Forces announced on its account on the social media website Twitter that the wall of an old building collapsed on four Syrian workers during the demolition of the structure.

It noted that the incident took place in the neighborhood of Karm al-Zeitoun in the area.

"The workers had different types of injuries, and one of them was gravely wounded,” the ISF noted.

Later on, security forces announced that Syrian national Ahmed Kh. was killed in the wall's collapse, adding that three of his colleagues were injured.

Beirut municipality chief Bilal Hamad blamed the person in charge of the construction site for not taking the necessary procedures to “protect citizens.”

“Harsh steps will be taken at all construction sites that are not adopting such (safety) procedures,” he warned.

In march 2012, 26 people were killed and 12 wounded in a building collapse that took place also in Ashrafieh.

The incident had raised fears of the occurrence of similar ones given the abundance of old buildings in the country and people’s ignorance of proper construction safety rules.

Despite the outcry over the collapse, no official authority has been established in order to monitor similar cases to prevent the repeat of the disaster.

Also in March 2012, the front of a vacant building collapsed in the Beirut neighborhood of Bourj Hammoud without resulting in any casualties.

Damage was limited to nearby power poles and parked cars.

Blame the government for not imposing and enforcing safety regulations. Blame construction companies for not doing so despite lack of government control !