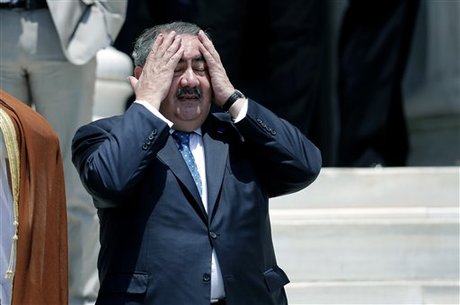 Speaking in Saudi Arabia, Zebari also urged the kingdom, which has openly criticized "sectarian" policies of the Shiite-led government against Arab Sunnis, to "stop media incitement" and to support it against "terrorism."

"Iraq has officially asked Washington to help under the security agreement (between the two countries), and to conduct air strikes against terrorist groups," Zebari told reporters in Jeddah, following Arab ministerial consultations.

Militants, spearheaded by the jihadist Islamic State of Iraq and the Levant (ISIL) and joined by supporters of executed dictator Saddam Hussein, have overrun a large chunk of northern and north-central Iraq in the past week, although their advance has since been slowed.

"A military approach will not be enough. We acknowledge the need for drastic political solutions," Zebari said.

The United States spent millions of dollars over several years training and arming a new Iraqi army after disbanding the Sunni-led force created by the late dictator Saddam Hussein.

President Barack Obama has sent a small number of military personnel to Baghdad to strengthen security for the U.S. embassy and is weighing potential military options, including air strikes, to counter the militant onslaught.

"Our message is that all are requested to stand by Iraq's side against terrorism," he said.

"Saudi Arabia says all (developments in Iraq) were due to marginalization and sectarianism (against Sunnis). It did not mention the slaughtering and bloodshed. Hundreds of soldiers have been executed... The situation can't be looked at from one angle," he said.

"We have had frank discussions with the Saudi leadership about this, and we asked for their help, and to stop media incitement," he said, denouncing "fatwa edicts describing the events as a revolution."

Saudi media were swift in condemning Nouri al-Maliki's government and trying to minimize the role of ISIL in the insurgency through highlighting the role of Sunni tribes and other armed groups.

Zebari acknowledged that Arab Sunnis feel marginalized, but said killing is not the solution.

"Sunnis feel wronged, marginalized and less-represented. Yes, we support their demands and we will continue to do so, but not through the killing and massacring in the name of defending the Sunnis and their interests," he said.

Later on Wednesday, the White House indicated that President Barack Obama had yet to rule out air strikes in Iraq to support government forces against the rampant Sunni militants.

Obama, who was due to meet top congressional leaders, including Republican critics, to discuss his strategy, was considering a range of options, his spokesman Jay Carney said.

"The only thing the president has ruled out is sending troops back into combat in Iraq, but he continues to consider other options," Carney said.

"Work is being done that will help us see with more clarity what the options available to the president are," Carney added, when asked to clarify whether Obama had ruled out air strikes.

Earlier, some U.S. media reports suggested that the White House has decided to hold off on "immediate" air strikes by manned planes to check the fast advance of ISIL across Iraqi territory -- partly due to a difficulty in identifying appropriate targets.

Amid a rising political furor in Washington over U.S. strategy in Iraq, Obama was to welcome top congressional leaders to the Oval Office.

Why us, try your friends in Iran...

So that you Saudi cannibals understand why you will be destroyed and don't go crying that your weren't warned.

No can do Tony, this is why

the stupidest comment by the worm ever! LOL to finish what they started! LOL why can't they ask the help of iran which boast itself to be a regional power? LOL why not the help of hezbis? LOL
no they chose USA... a hard blow on your M8 great satan propaganda!

hey the worm : iraq asked the help of the US, not the other way round so stop twisting things to please your low ego....

"...to "stop media incitement" and to support it against "terrorism.""

It's hard to ask the founder of modern-day terrorism to stop its promotion of terrorism. That is its culture, that is its ideology, and that is what is exists for.

tex is an expert on begging, with the usual long and boring post.