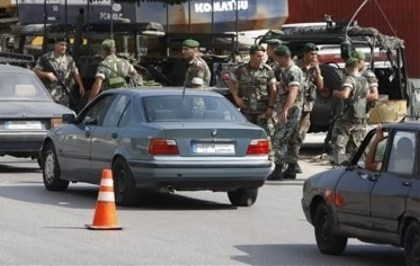 The Lebanese Army launched a campaign to apprehend members of the Qaida-linked Abdullah Azzam Brigades after the arrest of several men affiliated to the group.

According to As Safir newspaper published on Friday, the army intelligence detained recently in Beirut's Tariq al-Jadeedah neighborhood a 47-year-old Syrian national identified by his initials M. R.

The newspaper reported that the suspect is funding terrorist groups linked to Abdullah Azzam Brigades and is allegedly closely linked to an extremist clergyman, who is said to have provided Naim Abbas with the rockets set to be launched in Beirut's southern suburbs.

Abbas, a top official in the al-Qaida-linked Abdullah Azzam Brigades is charged with belonging to an armed terrorist group.

Several of the latest bombings in Hizbullah strongholds in Beirut's southern suburbs and the Bekaa Valley have been claimed by the Abdullah Azzam Brigades whose leader, Majed al-Majed, was captured by Lebanese authorities in December and died in custody later.

Al-Liwaa newspaper said that the army carried out raids in the northern city of Tripoli during the past three days and apprehended three people identified as Ziad Hassoun and Ahmed and Jamal Abdullah on charges of opening fire at solders in al-Kanaaes neighborhood in al-Zahriyeh area.

Hassoun was released, while the two Abdullah brothers remain in custody.

They are reportedly charged with belonging to Abdullah Azzam Brigades.

On Monday, unknown assailants severely wounded a soldier in al-Kanaaes neighborhood in a drive-by shooting.

please send us as well abu 3adass, Colonel Ali Chahror's BS like usual...
Time to free the LAF from syria/hizbiran...