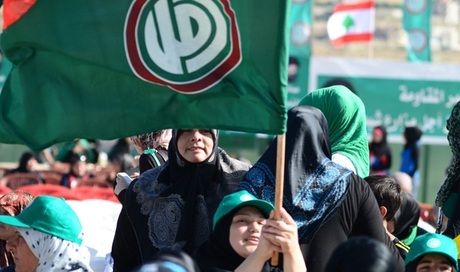 Interior Minister Nouhad al-Mashnouq on Friday morning asked Speaker Nabih Berri to postpone an AMAL Movement ceremony over security concerns, before clarifying in the evening that the event was not the target of a specific security plot and it was canceled as a precaution.

“We obtained information from foreign countries about booby-trapped cars in Lebanon, so in order not to allow the terrorists to target a rally containing 1,800 people, we recommended that AMAL Movement's ceremony be canceled and this is why I called Speaker Berri,” Mashnouq said in response to a reporter's question after a Higher Defense Council meeting at the Grand Serail.

“We did not have information that AMAL Movement's ceremony was going to be targeted but I contacted Speaker Berri as a precaution,” the minister added.

Earlier in the day, AMAL Movement said it had decided to postpone a conference at Beirut's UNESCO Palace after receiving security information and contacts with Mashnouq.

The conference, which Berri was supposed to attend, was postponed to an unannounced date.

The Interior Ministry said in a statement that following its request Berri sought to postpone the conference, without citing the reasons.

The communique said that “the conference was set to open at 10 am under the auspices of Berri at the UNESCO and the attendance of prominent figures.”

State Minister for Administrative Development Nabil de Freij said in comments to Voice of Lebanon (100.5) that security agencies “received information of security threats against Speaker Berri and some March 14 figures.”

On Monday, media reports revealed that the Internal Security Forces Intelligence Bureau is in possession of tapes from security cameras showing two suspects allegedly involved in an assassination plot against Berri.

The newspaper said that the two men, one on foot and the other on a motorcycle, were able in February last year to approach Berri's residence in Beirut's Ain el-Tineh area after the speaker ordered to limit security measures in an attempt to appease residents in nearby buildings.

News about the assassination attempt against Berri, who is also the head of AMAL Movement that is allied with Hizbullah, emerged in late February when several dailies reported a plot by the Qaida-linked Abdulllah Azzam Brigades.

The investigation has so far revealed that the plotters were planning to “break the defense wall” near Berri's residence by blowing up two car bombs to pave way for the driver of a third vehicle to detonate his explosives in the yard of the mansion.

Another scenario lied in using around seven suicide bombers on motorcycles to attack the security checks and opening the road to two booby-trapped cars to hit the wall of the compound and enter the yard.

@FT : in the meantime, there are over 40 tons of evidence collected pointing to Hezbollah's involvement in Hariri n co's murders.

So either go to court or shove these 40 tons where the sun doesn't shine !

Fact is, there is no link between M14 and pseudo assassination attempt of M8 figures. Look elsewhere and shut up !

Want to see the proof, go to the hague.

Want to discredit it ? You have all time in the world to sift through it with your lawyers and debunk the evidence.

Again, you come up with stupid allegations based on nothing but wishful thinking whereas there is unsurmountable evidence pointing to Hezbollah's involvement and you are incapable of demonstrating the contrary !

It is so shameful to see to what level Lebanese society has dipped with these medieval and primitive Islamic women with their tablecloth type dresses and awfully hideous headscarves to match. Makes me feel like we are in Yemen back in the 15th century.

To Flamethrower--- Oh go to hell you Iranian vassal. Your arguments have run out of steam. Do us a favoir and move to Tehran and take the rest of your illiterate and ignorant followers with you to serve your masters there.