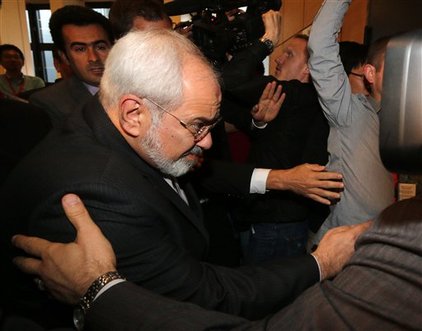 His remarks, broadcast live on state television, came after five days of negotiations in Vienna that seek to transform an interim deal into a lasting accord to resolve a decade-long stand-off over Iran's nuclear ambitions.

"We have not reached agreement on the main issues. In some cases, we can see light for agreement but in some others, there is none yet," Zarif told a briefing with Iranian media.

He said negotiators from Iran and the five permanent members of U.N. Security Council plus Germany had spent at least 10 hours on an unfinished draft agreement.

"There are more brackets than words in it," Zarif said, alluding to many differences yet to be bridged and which have been postponed to the next round of talks, which starts on July 2 in Vienna.

The talks seek to secure by a self-imposed July 20 deadline a mammoth deal to curb Iran's program and allay Western suspicions that the Islamic state seeks to acquire nuclear weapons.

Iran denies ever wanting an atomic bomb, and wants crippling U.N. and Western sanctions to be lifted in a final deal.

Zarif said that among the members of the so-called P5+1 group, the United States had adopted a "more rigid stance" which would force it into making more difficult choices if there is going to be a deal.

"We feel there are still maximalist stances on the other side, which I think should be dropped," Zarif said.