Hizbullah Urges 'Solidarity in the Face of Terrorist Conspiracy' 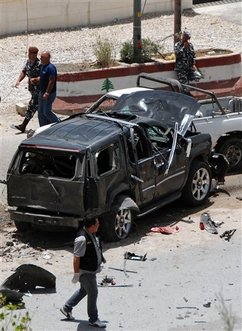 Hizbullah on Friday called for confronting the “terrorist conspiracy” that is targeting the Lebanese, urging the completion of the “security achievements” that had led to stopping bombings for a long period of time.

“Regardless of the objectives and targets of the terrorist suicide bombing that occurred this morning at the Dahr al-Baydar checkpoint, this is a bomb attack targeted against Lebanon and its security and stability,” the party said in a statement.

Condemning the “dangerous” bombing, Hizbullah extended its condolences to the Internal Security Forces institution over “the martyrdom of Chief Warrant Officer Mahmoud Jamaleddine,” hailing the ISF's “efforts and sacrifices.”

“The hand of terrorism has once again targeted Lebanon, its security institutions and its innocent people through the dangerous bomb attack that struck a vital road that links Lebanon's regions together,” the party added.

It urged the Lebanese to “show solidarity in the face of the terrorist conspiracy that is targeting them and to understand the threats that are surrounding their country.”

Hizbullah also called on security agencies to “continue their security achievements at all levels and exert utmost efforts to arrest the criminals who perpetrated this bombing.”

An ISF member was killed and 32 people were wounded in the suicide car bombing that rocked the Dahr al-Baydar checkpoint earlier in the day.

Also on Friday, the busy Hamra district in Beirut was the scene of a major crackdown over a suspected terror plot, with security forces interrogating 102 people at a number of hotels, among whom only 17 remain in custody.

The last explosion to hit Lebanon occurred on March 29, when a suicide bomber in an explosives-laden car targeted a Lebanese Army checkpoint near the Syrian border, killing three people. Earlier in the year, a series of car bombs struck Shiite areas across Lebanon, killing and wounding hundreds of people.

Hard-line Sunni groups have claimed responsibility for those killings, saying they are meant to punish Hizbullah for supporting Syrian President Bashar Assad in the face of rebels seeking to oust him.

Lebanon is for the LEBANESE and it's Army, not foreign militia's. Please keep your griefing back in your home countries, thanks a ton.
Signed, Lebanon.