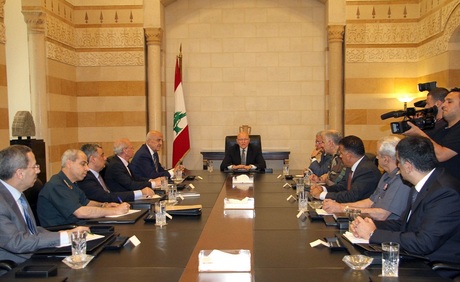 Interior Minister Nouhad al-Mashnouq said that Friday's deadly bombing at a security checkpoint in the Bekaa's Dahr al-Baydar region was a dangerous security “violation,” but remarked that it was only an “exception.”

“No one can deny that what happened today was a dangerous development and one link of the chain of the open war on terror,” Mashnouq said after an exceptional security meeting at the Grand Serail, but stressed that the blast “was the exception, not the rule.”

He continued: “We are before two choices; we either surrender to terrorism and act as if it is the rule and this will not happen, or we be continuously ready to confront all forms of terrorism. We won't back down regardless of the consequences.”

Mashnouq expressed that the Dahr al-Baydar blast highlights the “firmness of the security plan and the vigilance of security agencies, which prevented the suicide bomber from carrying out his plot.”

Earlier on Friday, a suicide bomber blew a car up at an Internal Security Forces' checkpoint in the Dahr al-Baydar region in eastern Bekaa, killing Chief Warrant Officer Mahmoud Jalaleddine and wounding 33 others.

Several reports said the bombing aimed at targeting General Security chief Maj. Gen. Abbas Ibrahim, who was about 200 meters away from the site.

Mashnouq revealed to reporters at the Grand Serail that a young man who spoke with the suicide bomber on the old Sawfar road to the northeast of Beirut said that he was Syrian.

“The investigation will lead to a serious outcome,” he confirmed.

The Interior Minister added: “I do not want to say that what happened today was surprising, as we had certain information. This is a permanent possibility but it is being strictly confronted by all security forces.”

He urged the Lebanese to “be vigilant and realize that political disputes are not the right way to address the blaze that is burning around us.”

“The impact of this blaze on us is very limited and we must acknowledge that this is the tax imposed by geography,” he said.

“Terrorist organizations can proliferate any moment and it is inaccurate to say that we can deal a final blow to them in Lebanon, Syria or Iraq,” he pointed out.

But he assured that at the same time, “all security forces, topped by the army, will fully shoulder their responsibilities.”

Meanwhile, Army Commander General Jean Qahwaji assured the Lebanese people that the situation in the country is “a thousand times better” than elsewhere, hours after the deadly Bekaa blast took place, and after security forces carried out wide scale raids in the Beirut neighborhood of Hamra in search for fugitives suspected of planning a terrorist plot in different Lebanese areas.

"The situation (in the country) is not that dangerous and things are blown out of proportion and exaggerated,” Qahwaji told reporters before joining security officials at the exceptional meeting at the Grand Serail.

Troops are carrying on with the implementation of security procedures and these were never halted, the army chief said after the meeting with the same reassuring tone.

"There is no need to exaggerate things,” he reiterated.

"Do not forget that the entire region is boiling and security bodies are on alert,” he stressed.

We are still doing a thousand times better than others, he assured.

“Salam was briefed on the information regarding attempts to undermine security by certain individuals and (the Premier) said that the terrorist operation was aimed at undermining stability in Lebanon,” Kheir elaborated.

He continued: “Salam voiced his relief over the measures that were taken by security agencies, asking the relevant security chiefs to maintain the highest levels of alertness and step up the level of coordination among them to foil the plots of those seeking to mess with the country's security. He also said what happened today must lead to the solidarity of the political forces and the activation of political efforts”

Kheir added that the conferees stressed the “need to continue the implementation of the security plan and take measures to confront any attempt to tamper with the security of the Lebanese and track and monitor the plotters and culprits.”

LBCI television reported that it was also decided during the security meeting to step up protection measures outside official buildings, security posts and checkpoints.