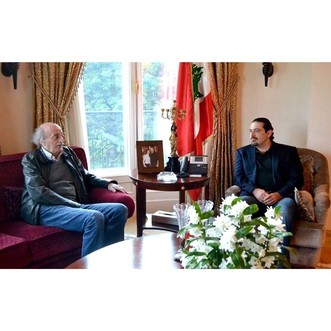 The talks are the first between the two leaders in over a year, and they are expected to discuss the country's presidential deadlock.

Jumblat had delegated Health Minister Wael Abou Faour to the Moroccan city of Casablanca earlier this month to prepare for the talks with the former PM.

The PSP leader has repeatedly stressed that he will not endorse Free Patriotic Movement leader MP Michel Aoun or Lebanese Forces chief Samir Geagea for office.

The PSP chief had met with former President Michel Suleiman over the presidential deadlock upon his arrival to the French capital on Wednesday.

Al-Jadeed television on Friday quoted Jumblat as saying that he considers that Aoun's remarks to Hariri to contain a “veiled threat.”

Aoun had said in a televised interview earlier this week that he will be able to guarantee Hariri's security if he returns to Lebanon, but only if the FPM leader took office.

Suleiman left office on May 25 without a successor to lead the state in the coming six years, as differences between the March 14 and the March 8 alliances prevented the election of a new president.

Parliament failed for the seventh time on Wednesday to elect a new head of state as the lack of quorum prevented holding the scheduled electoral session.

Are you FPM'ers that desperate to blame the Mujnoun's remarks as being twisted by naharnet???
How pathetic that the strongest, most popular Tarzan Christian leader (who by the way has zero Christian values) is holding the country hostage all because Mujnoun is gutless to democratically nominate himself & like humans go to the votes...

On the other hand, since March 2013, I've been convinced that Syria HA will prevent an election of new president... Mujnoun stars as only their interruption knowing even they cannot trust the desperate Mujnoun

The many steps the axis' plans to weaken the Christian presence...

and wolf please explain how "political security" in Lebanon means something other than to guaranty that Hariri will not suffer political assassination? You're playing semantics. Ever had a death threat against you by people who have already assassinated 22 of your political associates?

M11 can't argue & agree..
But let's call it how it is... There is a plan weaken Christian presence through the project that started with the Mujnoun
Then they open gates to hardcore extremists to finger point Sunni / Shia friction...
Religion is big problem when used in war or as a weapon..

All serving the purpose of chaos that only benefits Israel, Iran & KSA

Your name sums you up wolf... You're a coward to attacks vulnerable but run away like a chicken when challenged...
Go cry some where else

The only lies & blunt propaganda stems from a fake misguided & deceptive organisation called the FPM... The FPM will die with your Mujnoun
He is used, abused & achieves nothing good.. Only achievement of destroying, dividing, delaying & interrupting Lebanon... What an accolade to boast WOW

Without the Aounists propaganda machine's or wolf's cyclical deceptive spin, this is what the senile octogenarian really said

wolf
I am not sure I want to debate but here is my point. Although I admire your genuine love for the country I think it is remarkable and I fully share that with you. You have been advocating a military coup. let's face the sad reality our army is corrupt we have a lot of clean up to do in order to make a viable institution I think our support to the LAF stems from the people's desire to cling to the only institution we have that unifies ALL Lebanese but I am convinced that our LAD has a lot of work to do to improve itself into a viable institution.
I do not support Kahwaji as our future president as I do not think he has the skills to tackle Lebanon's many problems he is no general fouad chehab. we simply need a team of professional educated citizens to access power and deal with our problems

wow sorry for my many typos bro

Wolf well said I agree with you 100%!
Whilst we have different political views which is our god given right and this often takes precedence we MUST start talking about the things we Lebanese have in common and encourage any public debate to do so as well. For to keep doing the same old thing is to keep getting the old result. And this result is no longer acceptable! We as patriotic Lebanese must stand united and have the balls to call a wrong, a wrong! And then demand the same from everyone else.

To paranoid misled delusional unable to think for himself wolf...

this is what Aoun said