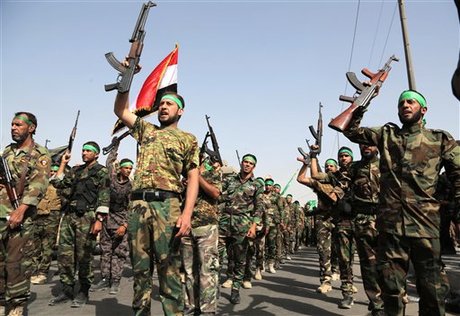 Sunni militants who fought together to capture swathes of Iraqi territory have turned their weapons on each other during clashes in Kirkuk province that cost 17 lives, sources said Saturday.

The fighting erupted on Friday evening between the jihadist Islamic State of Iraq and the Levant (ISIL) and the Army of the Men of the Naqshbandiyah Order (JRTN) in Hawija, in Kirkuk province, said the sources.

There were differing accounts as to what sparked the firefight, which is a potential sign of the fraying of the Sunni insurgent alliance that has overrun vast stretches of territory north of Baghdad in less than two weeks.

One security official said JRTN fighters had refused an ISIL demand to give up their weapons and pledge allegiance to the jihadist force.

Witnesses, however, told Agence France Presse the two sides clashed over who would take over multiple fuel tankers in the area.

Analysts have noted that while the Sunni insurgents, who are led by ISIL but also include a litany of other groups including loyalists of now-executed dictator Saddam Hussein, have formed a wide alliance, it is unclear if the broader grouping can hold together given their disparate ideologies.

ISIL espouses an extremist interpretation of Islam and wants to establish an Islamic state, whereas other armed groups have political differences with the regime in Baghdad, suggesting the alliance could eventually break down.

"If history repeats itself, then ISIL, because it's got a transnational goal of a caliphate, because it's radical, because it's got this ludicrously absurd... approach to Islam, they can't help but break that coalition," said Toby Dodge, head of the Middle East Center at the London School of Economics.

ISIL, which is seen as the most capable militant group in Iraq, has for months clashed with groups opposed to President Bashar Assad in neighboring Syria, where it also operates and where it is seen as far more extremist than even al-Qaida's front group in the country.

This is one proof that ISIL is not a threat. ISIL can conquer a teritory. However it will not sustain because: 1- It cannot hold a territory. 2-It cannot make an honest alliance. ISIL is the Gengis khan of the 21st century. They are not a threat to lebanon.

The only threat to lebanon is the HA milicia which infiltrated the government and paralized it, killing whomever stood in its way and the Amal thugs which bloat our public administration with useless overpaid employees.

Hebel shu hebel. Worst than children, and they have weapons...

isis represents less than 10% of this sunni uprising haboub...

so everyone opposing Assad or Malaki is a Sunni Al Qaeda? You are an idiot.