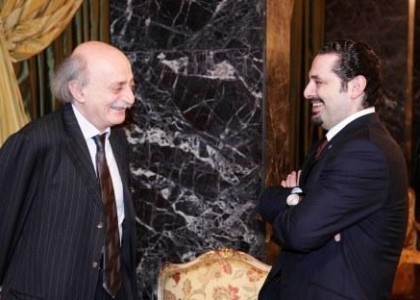 The recent meeting between head of the Mustaqbal Movement MP Saad Hariri and Progressive Socialist Party chief MP Walid Jumblat failed to make a breakthrough in the dispute over the presidential elections, reported the pan-Arab daily al-Hayat on Sunday.

Informed sources explained that Jumblat voiced his commitment to the nomination of Democratic Gathering MP Henri Helou, while the former premier expressed his commitment to maintaining his rapprochement with head of the Free Patriotic Movement MP Michel Aoun.

Hariri's position however has not changed over Aoun's nomination to the presidency as he “will not abandon his allies.”

“If Aoun seeks to be a consensual president, he cannot do so simply with Hariri, but with Christian forces and Jumblat, explained the sources.

The March 14 alliance has repeatedly voiced its support for the nomination of Lebanese Forces leader Samir Geagea, while Aoun has stated that he will only run for the presidency if there is consensus over him.

Moreover, the sources told al-Hayat that Hariri had informed Aoun that “he will not agree to any settlement over a presidential candidate if the FPM chief does not support it.”

“Such a settlement is not acceptable if Aoun continues on insisting on running for the president and as long as Hariri's Christian allies reject his candidacy,” they revealed.

During the talks, Jumblat had inquired whether Hariri would back Helou, who is a member of the PSP chief's Democratic Gathering bloc, reported the pan-Arab daily Asharq al-Awsat Sunday.

Hariri had replied that his support for the MP is not limited to him, but he would need to consult with his allies over this issue, specifically with Geagea.

Hariri and Jumblat had met in the French capital Paris on Friday.

The leaders highlighted the importance of holding such talks, especially on the presidential elections “to avoid extending vacuum (in the presidency) and to preserve the institutional work in this critical phase,” the statement detailed.

The PSP leader has repeatedly stressed that he will not endorse Aoun or Geagea's nomination for the presidency.

He also rejected withdrawing the nomination of Helou “in favor of the Central Bank chief or Army Commander General Jean Qahwaji.”

They should both pack their bags as this game is almost over. Democracy will prevail!