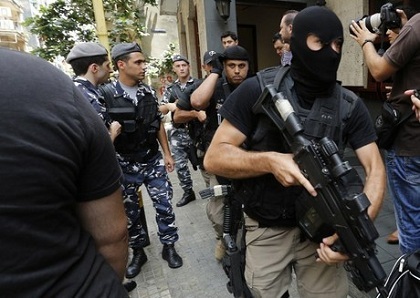 Investigations are ongoing with three of the suspects arrested during a security raid in the Hamra neighborhood in Beirut on Friday, reported the daily al-Mustaqbal on Sunday.

It said that one of the suspects is French national with Arab origins.

He is believed to have played a central role in a terrorist network, the name of which was not revealed.

It also remains to be seen whether this network is behind Friday's Dahr al-Bydar bombing.

The investigations have so far discovered the network and that the French-Arab is its leader.

Al-Mustaqbal reported that contacts are ongoing between Lebanese and French authorities for further details on his identity.

Later on Sunday, LBCI television reported that the French national is 30 years old and that he confessed during interrogation to plotting "a terrorist act against a certain Lebanese region."

It revealed that the two other suspects were freed after being cleared of any charges.

The Hamra area in Beirut was the scene of a major crackdown over a suspected terror plot on Friday, with security forces interrogating 102 people at two hotels, among whom only the French national remains in custody.

Also on Friday, a suicide car bombing rocked an Internal Security Forces checkpoint in the Bekaa area of Dahr al-Baydar, killing an ISF member and wounding over 30 people.

The blast went off only 200 meters away from the convoy of General Security chief Maj. Gen. Abbas Ibrahim but it is still unclear if he was the target of the attack.

and so is the terror group call hizbollah trained by a terrorist state called Iran...

U know southern ,daily i read some news on naharnet but i find ur comments stupid no idea if u r like ur comments .

Sure Southern idiot, you want fries with that?

security forces arresting 102 people at a number of hotels, among whom only 17 remain in custody

Cannibals everywhere! Lebanon will be free of them soon. This game is over.

Southern you stupid girl, you want fries with that?

I love how the M8 love to come out and attempt to make a legitimate argument, only to be laughed at. So a French national was there, who cares? At least France themselves have the balls to confront any Extremist riseup from whatever sect, and not let them impose their ideology on the regular people. Here in Lebanon? Iranians were let in, imposed their ideology...then the Salafi's, again imposing their ideology....SO stop whining about France, when you in part are a contributing factor to the garbage pile in Lebanon.

Must have taken years to come up with such a sophisticated and clever comeback, you brilliant individual.

France has shown more courage and support for Lebanon rather than your Iranian bretheren. Secondly? They at least have been getting terror cells in France who are Salafi too, I'd love to see if you and your Revolutionary Guard siblings even come close to what they've done for Lebanon, and that means ALL Lebanese.

Southern, happy to see you support your native country of Iran. As for me? not a fan of zionists, salafis, or Iranian revolutionary guard implants such as yourself. Cheers.

PS I'm full blooded Lebanese who can state my family's villages beyond 10 generations, I'd like to see you be able to do the same :)

Castrate him and send him back to France.

I wonder where this French terrorist got his ideas from:
Suicide bombing and Sauna:
https://www.youtube.com/watch?v=knAA-glMEEM

(As posted by a fellow commentator earlier)

Hey southerner open the link below and read. C'est troubling!

That is an excellent article! Kudos for digging that up. I can confirm the that many of the IP Addresses used to upload ISIS videos do in fact originate from Iran.

GreatPierro.
Interesting. I always say that the source of all evil is Iran and its minions, Assad and Hezbollah.

ISIS is just a tool they use like other tools, such as the fight against israel for example.

I hope to see the day that the hardliners in iran fall, and iran get governed by a pragmatic non imperialistic, isolationist figure.

Very good article Pierro, thanks for the link

Kinda hypocritical of you wouldn't you say?