Hodroj Hailed as Hero as His Hunch Prevents Possible Massacre 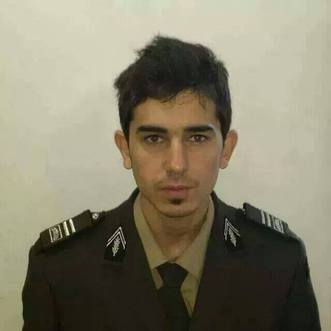 A hunch by a young Lebanese security officer prevented a potential massacre as scores of people watched a World Cup match in Beirut's Tayyouneh area, but it also cost his own life.

The intuition and bravery of 20-year-old General Security inspector Abdul Karim Hodroj meant he was hailed as a hero on Tuesday.

Hodroj had been driving home late on Monday with a colleague, Ali Jaber, when they saw a white Mercedes driving against the traffic flow towards the popular Abou Assaf Cafe, a senior General Security official told Agence France Presse.

At the time the south Beirut cafe was packed with scores of people watching the Brazil-Cameroon clash.

"The vehicle stopped in the middle of the road, and a man got out. (Hodroj and Jaber) stopped him and questioned him. The man said his car key was broken, and he couldn't drive any more," the official said on condition of anonymity.

The two officers were immediately on guard in a country where car bombings have become common, and south Beirut -- heartland of Hizbullah -- has been a frequent target.

Jaber went to the closest army checkpoint to report his suspicions, while Hodroj stayed to ensure the man did not get away, the official said.

Jaber was 30 meters away when "the explosion happened," he added.

Hodroj was killed, and Jaber and several bystanders were wounded.

The densely populated neighborhood of Shiyyah was in shock Tuesday, as Hodroj's 47-year-old father Fadel received condolences at a hall in the Two Martyrs Cemetery.

"Your son is a hero," one visitor told the bereaved shopkeeper whose eyes were red with tears as he chain-smoked to help him cope with the pain and muttered "God keep you" to mourners.

"He saved the neighborhood. He saved us from a massacre. We consider him a hero. We are proud of him," Hodroj's uncle said.

Hodroj was the sole fatality of the car bombing that also wounded 20 people.

"Some 200 people were watching the match. Abdel Karim (Hodroj) loved football and was impatient to watch his favorite team Italy play Uruguay on Tuesday," his uncle told AFP.

"He was so young. We should have been organizing his wedding, not his funeral ceremony."

The pain of loss was especially difficult to bear for Hodroj's father Fadel -- Abdel Karim was his only son.

A photograph at the funeral depicted a young man with black hair, fine features and smiling mischievous eyes.

He joined the General Security agency just 18 months before he died. An inspector, he worked in its IT department.

Elie, who studied with Hodroj, told AFP: "Everyone liked him. He loved life, and was enthusiastic about his work."

His uncle added: "He loved to joke, and put everyone at ease. Anyone he'd meet would soon feel he was an old friend."

Hodroj's black-clad mother and her two sisters sat in another room, mourning their loss. The family is from the village of Bazouriyeh in southern Lebanon.

The explosion that killed Hodroj took place at midnight Beirut time (2100 GMT Monday), at the entrance to the Shiyyah district.

An AFP photographer saw several cars ablaze as firemen fought to douse the flames and ambulances ferried the wounded to hospital.

The attack came just three days after a suicide bombing in Dahr al-Baydar in the east of Lebanon killed one person and wounded around 30.

"The war against terror is being fought all across the world. In Lebanon, there are sleeper cells. When the conditions are there -- like in Iraq -- or when the political situation is especially unstable in Lebanon, the cells wake up," a high-ranking General Security official said.

"All the country's security services were mobilized to try to stop them," he said.

Beirut's southern suburbs, a stronghold of Hizbullah, have been targeted by attacks for months.

Most of the attacks were claimed by Sunni extremists who said they were because Hizbullah sent thousands of fighters into neighboring Syria to support President Bashar Assad's forces battling rebels.

@Southern : Only in your twisted sectarian little brain do people rejoice over the death of a Lebanese citizen. Unlike you, M14 or Anti-Hezb do not celebrate the deaths of others.

May he rest in peace and know that his bravery will always be remembered despite idiots like the one above who will try to turn his death into political BS !

I don't see the relationship.

Hating Hezbollah, your weapons and your war has nothing to do with being sectarian. My wife is part shiite so you can shove your assumptions where the sun doesn't shine along with your weapons and hatred and terrorist behaviour !

Joshbustani, I hope u feel the same pain u filthy SOB !

This is a real hero for Lebanon. He joins the ranks of Wissam Eid, Francois el Hajj, and Hashem el Salman. All of whom fought against terrorism for the sake of liberating their country.

His funeral ceremony should be held in Martyr's square and we should have all politicians go pray on his tomb. Lachou martyr's square? just to build expensive real estate?

probably killed by the same killers that got rid of Wissam Eid, Francois el Hajj, and Hashem el Salman.

ghadanfar go suck on a doorknob you pimple faced teenager

I guarantee you Israel can wipe Iran off the map.

Josh, Southern ... This is a chance for both of you to shut up.

Wla mish 3ayb 3alék ya Josh, coming over on a man's obituary page to gloat over his death and "bless" more of the same? Show some respect, goddamnit! You can go on hating Hizb some other time - I hate them too, but right now is not the time to be giving out candy on the streets, but to mourn and help those afflicted to recover. Be a Lebanese before being a politico-religious sectarian.

RIP to this hero.

Shut the hell up you Iranian scum

Southern pls do your research about dash. There are troubling evidences that they are being harbored and supported by iran which explains why the syrian regime does not fight dash and why the iraki soldiers have abandoned their positions, weapons and money to dash without a fight. if daesh is behind the late terrorists attack then we could question the role of iran.