Hariri Hits Back at Aoun, Urges Hizbullah to Withdraw from Syria 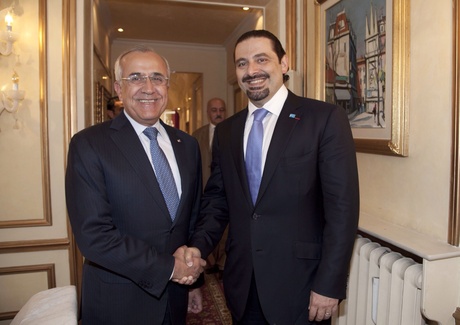 Head of the Mustaqbal Movement MP Saad Hariri on Tuesday snapped back at Free Patriotic Movement leader MP Michel Aoun over the latter's remarks on guaranteeing the “political security” of the former premier if he returns to Lebanon.

“I don't need any political security when I decide to return to Lebanon as God protects everyone. General Aoun may have clarified what he meant but despite that his statement was inappropriate and should not be said to Saad Hariri or to any other Lebanese politician,” Hariri said in response to a reporter's question after meeting ex-president Michel Suleiman in Paris.

“We have a path and we will continue it and it is based on Lebanon's unity and the interest of Lebanon which must come before anything else,” Hariri added.

On June 17, Aoun said he is waiting for al-Mustaqbal movement to nominate him or endorse someone other than Lebanese Forces leader Samir Geagea for the presidency, revealing that he had told Hariri that he would guarantee his “political security” if he returns to Lebanon.

“I told him that I can guarantee his political security if he returns to Lebanon but noted that I cannot guarantee it if I'm not in power,” Aoun said during a TV interview.

On the issue of the stalled presidential election, Hariri said blocking the election of a new president is “a crime against the Lebanese.”

“As a political movement, our stance is clear on the need for an inter-Christian dialogue so that viewpoints can be reconciled and a consensus becomes possible, especially that this post is for all Lebanese, but it is also a Christian post,” Hariri said of the country's top post.

“We call on everyone to truly think of Lebanon's interest, the Christians' interest in the Levant and the presidency's interest,” Hariri added.

Asked about the latest bombings in Lebanon, the ex-PM described them as “a cowardly act by some groups who do not want the state in Lebanon,” urging the government and security forces to exert “serious” efforts to put an end to the renewed wave of attacks.

Hariri also called on Hizbullah to “withdraw from Syria and spare Lebanese these tragedies that we are witnessing.”

“The fire will reach us if some parties are interfering in the Syrian or Iraqi affairs,” Hariri warned.

One person was killed and at least 20 wounded when a suicide bomber detonated himself near an army checkpoint and a cafe in Tayyouneh at the entrance of Beirut's southern suburbs in the early hours of Tuesday.

The car bombing came three days after a suicide attack in the east of the country which left one person dead and 30 wounded. That attack was the first in Lebanon since March.

The talks tackled the latest developments in Lebanon and the region, said the former premier's press office in a statement.

The meeting was attended by French Ambassador to Lebanon Patrice Paoli.

A gimp goes anywhere to be received. A man lives on the soil he defends.

YOU STUPID WOMAN! What about me! I live under the soil I supposedly defend, in fact deep under the soil, in the sewers. Are you saying I'm not a man, are you. And how about the heroic General Aoun, he sacrificed himself to defend his soldiers by running away to the French embassy while they were getting murdered under the Syrian tanks we later thanked. He did not tell them he was running away for their own good so he does upset them, or interrupt whatr turned out to be their worthless Martyrdom. The manly man General Aoun even spent a full 15 years defending the soil of France, that's how manly he was.

oh then aoun did not defend his country for a long long time! LOL

Every time you open your mouth, you put your foot in it. Do you want spare us and remain quiet? Hizbollah cannot survive on the Lebanese state only because they used to plant Hashish in the Bekaa, now they rob the government (Do not pay electricity and their employee are incapable to do their jobs but forced to the roles) and receive funding/arms from Iran to remain in power by intimidation and political assassinations.

Listen to the terrorists cry.

please u 3! the wall is gona collapse under your stupidity ...
if Lebanon is gona be a country this pimp and his minnion aoun will wish for saddam's rope and fate!

Yeah right, that's why he fled to ksa and can never return to Lebanon. hariri is the main reason why HA entered Syria and not hariris battle is lost and he is attempting to be a states man, still just another spoiled shit whom thinks his father was God. hariri should get over that his father was killed and stop his killing spree in Syria. The good part is that he will never be able to return to Lebanon and soon all his thugs in Lebanon will be joining him in ksa.

poor aoun, starting to understand that Hizb is only using him, and probably doesn't even want him as president...

Respect to Saad to stay firm despite the syro-iranian bombings...
Respect to Sleiman to work for the country's welfare...

Dude Saado Aoun will grantee your physical security as well

if you help make him president he'll have a chat with his friends the people doing the all the killing and threatening your and everyone else's security and tell them:
Look guys I'm the president so you can stop with the killing now or at least spare Saado, but if get the orders to kill someone else then go ahead get those killer saints of yours to do what they do so well, lord know we can always do with more saints.

“I told him that I can guarantee his political security if he returns to Lebanon but noted that I cannot guarantee it
Does that mean he met with saad and told him so directly? Or vis his cool son in law?
Aoun is nothing more then a toy in irans hand hard to believe his followers don't see him that way. U

get off it!
talk about the Palestinians, Israelis, takfiris,... this is all BS to the Lebanese people.
what matters is who has his gun pointed at us: the Iranians. who is threatening us? the Iranians.
nothing else matters: our true enemy are the Iranians.

bigjohn: please do not forget the assad regime which is an enemy of Lebanon as much as israel and any muslim extremism, hezbis included!

Please FT come and defend your glorious leader GMA. We ve never seen a better example of a low down hypocrite. Atleast Nasrallah knows he's a piece of garbage.

Ah qawmi john qawmi john how far have you fallen how intellectually bankrupt have you become have you forgoten that back then the syrian secular army located on lebanese territory and till then busy killing thousends of lebanese mostly Christians but muslims as well was even less interested than the arab takfiris in afganistan in fighting israli aggression, instead opting for the cowad's disorderly retreat

Qawmi john yeah I'm a "Fascist®", that sweeping go to term often used by pseudo leftists, anarchists and the likes to describe anyone who disagrees with them, it's their version of "Yo Momma". I would've also accepted "Imperialist®". Qawmi John is probably too young to remember that his Qawmis were called "Fascists®" by the leftists, Nasserites and endless Pan-Arabist groups back in the 1950s. Or the 1980s when communists Mahdi Amel and Hussein Mroueh and other secular leftist intellectuals got whacked by the "Islamic Revolution in Lebanon" now known as Hezballah, Hezballah itself became "Fascist®" instantly, at least according to al-Nidaa the LCPs magazine. Are Aounists "Fascists®", not anymore one MOU and they're clean, better than Tide®.

Only a terrorist supporter like Hariri gains the strength to talk after a terrorist bombing.

it is nice to see FPM zombies in desperate expectation of an answer after they kept saying that hariri is nothing anymore and is finished! LOL

funny how this shocks you but when M8 acknowledge that the lebanese president is the choice of the syrians, not a word!

so please spare us your hypocrisy , you are not the least credible, bashar boy

then if M8 says the truth : why are you sooooo mad at saudis when you hush up on syrian meddling with lebanese affairs? LOL M8 says that the lebanese president is the choice of syria! that is very patriotic indeed for people PRETENDING to want lebanon's independance! hypocrit you are

please just avoid making yourself ridiculous, you are the shame of your herd!

when hariri will be back to lebanon?

Dear Sophia...
First of all, you end your sentence with a question mark, which suggests that it is a question.
In that case, you should rephrase and ask: " When will Hariri be back to Lebanon?
Now, if this is the question you are asking, I can only tell you that no one can answer this question, knowing that his life is highly threatened, and that for the moment, he is guaranteed to end up like Gebran Tueni, the minute he steps foot on Lebanese soil... thanks to your little friends... Good day now.