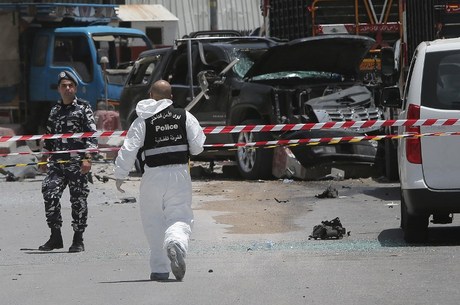 The gray Nissan Murano used in the bombing that targeted last week an Internal Security Forces checkpoint in the eastern town of Dahr al-Baydar was reportedly rigged with explosives in the eastern border town of Arsal, As Safir newspaper reported on Wednesday.

The daily said that the army intelligence is investigating if any illegal border crossings between the Syrian town of al-Qalamoun and Arsal are still accessible or if the car was prepared with explosives in Arsal.

It reported that the analysis of the telecom data indicates that the suicide bomber driving the Murano planned to target a high-ranking official in the attack.

According to the report, another booby-trapped vehicle was spotted in the area of Sawfar before it disappeared.

The suicide attack killed one person and wounded 30 others.

The last explosion to hit Lebanon occurred on March 29.

Earlier in the year, a series of car bombs struck Shiite areas across Lebanon, killing and wounding hundreds of people.

Raid Arsal from beginning to end now. If you harbor terrorists, you are just as guilty. Enough is enough.

Assafir is not a reliable source. Also, when you support the barrel bombing of civilians by the Assad regime, you are not in a position to teach about guilt, terrorism or basic morality. You are in the same ilk and indeed worse than those who support bombing of civilians in Lebanon.

Can we Raid the Southern Suburbs looking for Nasrallah? same as the Ali Eid scenario? this way we eliminate all troublemakers and bring peace to the state we live in.

notice how the protests from Arsal are non-existent anymore?
i thought they were oppressed?

He said we go there do they don't come here, but they still came here why is he still there must be something else he's not telling or just waiting for them to give him a fresh lie to tell us.

assafir ? lol.
We all know who does bombings in lebanon...

Raid Arsal all day everyday. That town is nothing but trouble and a location where all these ideas are sparked.

unlike you i do not need attention... but this post for everyone to see how void and stupid your posts are... you are just here to spend your time insulting proving how empty and running out of arguments your filthy brain is... now go and play with your dolls ok girlie?