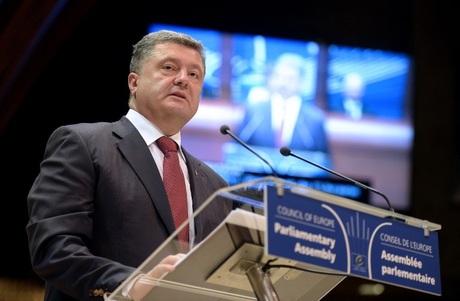 EU leaders on Friday gave Russia three days to change policy on Ukraine or face the prospect of tougher sanctions as Kiev said it would consider a ceasefire extension with pro-Moscow rebels.

In a statement Friday, the 28 European Union leaders said Moscow had to take four steps, among them clear backing for the Ukraine government's peace plan, by Monday June 30.

The leaders "will assess the situation and, should it be required, adopt necessary decisions," the statement said.

EU leaders underlined their "commitment to reconvene at any time for further significant restrictive measures," it added.

Diplomatic sources meanwhile said President Petro Poroshenko, who was in Brussels to sign a historic association agreement with the EU, had decided to extend by 72 hours a ceasefire agreement with the rebels that was set to end at 1900 GMT Friday.

Poroshenko did not confirm the ceasefire extension at a press conference but said he would consult his national security council on returning to Kiev.

Among the other conditions listed by the EU leaders were that Russia agree a verification mechanism, monitored by the OSCE, on a Kiev ceasefire in eastern Ukraine with the rebels and "for the effective control of the border."

Ukrainian authorities should also be allowed to resume control of three border checkpoints at Izvarino, Dolzhanskiy and Krasnopartizansk, while "hostages including all of the OSCE observers," should be released, the statement said.

Four observers from the Organization for Security and Cooperation in Europe abducted on May 26 by pro-Russian rebels were freed Thursday but several others are still being held.

The EU has so far imposed visa bans and asset freezes on more than 60 Russia and Ukraine figures for their role in stoking the crisis but have so far baulked at outright sanctions on important economic sectors despite strong pressure from Washington.

EU leaders agreed in March to examine and prepare such 'Phase 3' sanctions for use if needed.

Friday's statement noted that member states have been preparing such sanctions "so that further steps can be taken without delay."