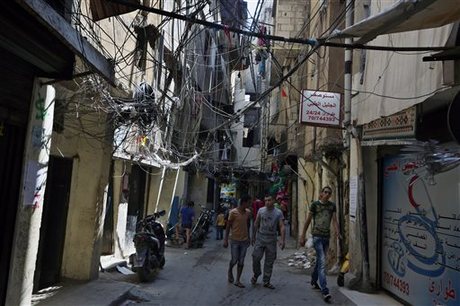 By his own account, Abu Wadih is a man very much in demand.

One look at the jumbled mass of sinewy electricity cables, TV and Internet lines that droop over the damp, narrow alleyways of the Palestinian refugee camp of Shatila, and it's easy to see why. Abu Wadih, as the chief electrician in Shatila, is responsible for making order out of that chaos and ensuring that the camp's more than 20,000 residents can turn on their lights and televisions.

"When I first started working, I ran away. I thought to myself, 'why would I do this?'" he said on a recent humid afternoon spent tending to the wires. "The network of wires is a spider web. ... I was in awe. How was I supposed to figure all that out?"

But in his five years on the job, Abu Wadih has indeed figured it out. He oversees his electrical empire from a dusty, white-washed building that serves as one of four substations that connects the camp to the Lebanese state grid. The station borders the largest open area in the crowded camp: a gravel yard the size of a volleyball court surrounded by six- and seven-story concrete bloc buildings.

At ground level, the yard betrays the camp's tortured history as a place of politics and refuge. On one wall, someone has spray-painted a Palestinian flag, a yellow butterfly and flowers. On another, a torn poster of Yasser Arafat, his mustache still a youthful dark, clings to the dusty paintwork.

The camp was founded in 1949 by the International Committee of the Red Cross to take in hundreds of Palestinians who fled their homes during the war surrounding the creation of Israel. It was heavily damaged during the 15-year Lebanese civil war, particularly after the 1982 Israeli invasion. Over three days in September of that year, Israeli-backed Christian militiamen swept through Shatila, and its sister camp of Sabra, slaughtering hundreds of men, women and children.

The United Nations Relief and Works Agency says there are some 22,000 Palestinian refugees registered in Shatila, but only about 8,000 live there — comprising around 30 percent of the camp's population. The rest of the residents are a combination of Lebanese, Filipinos, Sri Lankans, and now a large contingent of Syrians who have fled the civil war next door, according to UNRWA.

Abu Wadih, a 34-year-old Palestinian who was born in Syria, moved to Shatila at the age of 16. His given name is Mohammed Hazina, but his friends dubbed him Abu Wadih, he said, because of his resemblance to the Syrian crooner George Wassouf, whose own nickname is Abu Wadih.

He sold makeup for a few years before finding work as an apprentice electrician making house calls in the camp. It turned out he had a talent for the job, and eventually the camp committee hired him at $400 a month to tend to the government-supplied electricity grid.

"It's a source of money for me. I have a wife and two children and I rent a home," he said. "And it's hard for a Palestinian to get work outside the camp."

He works six days a week, usually staring around 8 a.m. and finishing around midnight. The work flow is structured around the regular rolling power outages that affect the camp, as well as the rest of Lebanon. When the power's cut, he heads out to repair frayed lines or to replace fried connectors.

During a recent visit, he climbed up on a plastic chair in one of the camp's dank alleys to switch out connectors hanging overhead. Laundry — a black abaya, an embroidered table cloth, a towel — hung out to dry dangled just above him. He bantered with passers-by, teased his assistant and told dirty jokes. The moment he finished one cigarette, he lit another.

"I feel like I'm doing something when a neighborhood is out of power and I bring the power back," he said.

All told, he said, it's not a bad job. And it's made him almost a camp celebrity.

"Everybody knows me, everybody asks for me," he said.

"What I gained from my work is the people's affection for me. I like people and I want them to be satisfied. This is a camp at the end of the day and there's no security. You have to be merciful with people. That's why people like me, and they wouldn't let me go. Honestly."

What a sweet report. I met an electrician yesterday who's name is Michel, apparently everyone who owns a bar or restaurant in Gemmayzeh knows him. Kind felt similar when he showed me how he works and the way he talked.

As for the above comments. Cut the racism guys and grow up, we'll all die eventually with nothing left in our hands other than the good soul we carry.

Plague did u ever drive in Lebanon. I think you have bigger problems here than that.
Also in addition to this I want to add the following: http://roadskillmap.com/

A Palestinian, born in Syria, living in Lebanon?
34 years old. so born in 1980. Therefore not a Palestinian Refugee, maybe his grandparents over 30 years before he was born were, but not him.
How exactly did a person with no passport move 18 years ago from one country to another?

how do ukrainian and moroccan jews call palestine their land ?

Cedre - probably the same way an Egyptian by the name of Yassir Arafat, called it his.

This kind of pre 1987 attitude turned all Lebanese against Palestinian refugees.
I mean every Lebanese sect turned against their destructive behaviour.
And yes the Lebaneae at least kicked out the Israelis from their land and have 1 government.
The Palestinians gave up their land in 1948 and then wanted to replace it with other people's lands. You have 2 governments and half your people are informants to Israel.
So keep your kind words to your people.