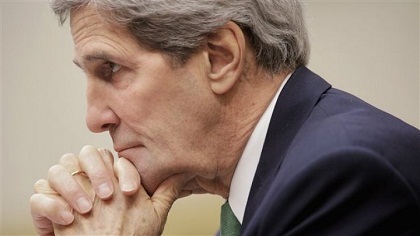 U.S. Secretary of State John Kerry arrived in Saudi Arabia Friday to meet the Syrian opposition as Washington unveiled plans to provide some $500 million in arms and training to the rebels.

The top U.S. diplomat, who landed in the Red Sea city of Jeddah in the afternoon, will also meet Saudi King Abdullah, a day after hosting urgent talks in Paris with the Saudi, Jordanian and UAE foreign ministers to discuss the widening crisis in Iraq and Syria.

King Abdullah has long called for greater U.S. military support for the Syrian rebels, whom the Sunni kingdom has long backed.

He has also been an outspoken critic of Iraqi Prime Minister Nuri al-Maliki, whose Shiite-led government has seen insurgents sweep up a huge swathe of territory, including second city Mosul, since June 9.

Riyadh accuses Maliki of excluding Iraq's Sunni Arab minority and has played down Western concerns that the insurgents are led by jihadists.

Maliki has hit back, accusing both Saudi Arabia and its neighbor Qatar of supporting terrorism.

Kerry will meet the leader of the Western and Saudi-backed Syrian National Coalition, Ahmad Jarba, as Islamic militants, who have been part of ongoing fighting between the Syrian army and rebel factions, have been emboldened in their territorial ambitions and seized chunks of neighboring Iraq.

In what would be the biggest boost yet by U.S. President Barack Obama's administration to the rebels in the three-year conflict, the White House has asked U.S. lawmakers to release $500 million to train and equip the moderate opposition led by Jarba.

The assistance would go to what the White House has called "appropriately vetted" members of the Syrian opposition.

Although the U.S. has provided some $2 billion in humanitarian aid, Obama has so far shied clear of providing heavy weapons, fearful they could fall into the hands of jihadists on both sides of the Syria-Iraq border.

Jarba visited Washington in May to plead for arms, especially anti-aircraft missiles, to help the rebels defend themselves from air strikes and barrel bombs being unleashed by President Bashar Assad's regime.

While U.S. officials normally refuse to comment on details of training for opposition groups, National Security Adviser Susan Rice acknowledged early this month that the Pentagon was providing "lethal and non-lethal support" to Syrian rebels.

About $287 million in mainly non-lethal support has been cleared for the rebels since March 2011, and the CIA has participated in a secret military training program in neighboring Jordan for the moderate opposition.

The rebels have found themselves fighting on two fronts, as jihadists belonging to Al-Qaida and the ultra-hardline Islamic State of Iraq and the Levant have flourished in the chaos.

"The move of ISIL concerns every single country here," Kerry said Thursday at the start of the talks with allies from the Gulf and Jordan.

"In addition to that, we have an ongoing crisis in Syria where ISIL is also involved."

Washington has been increasingly concerned that the jihadists' battlefield role on both sides of the Iraq border will play into the hands of the Assad regime.

Those fears were highlighted Thursday when Maliki "welcomed" Syrian government air strikes against ISIL fighters who control both sides of the Al-Qaim crossing on their common border.

Washington responded that military action by Assad's government would not be "in any way helpful to Iraq's security."

U.S. officials say Washington is calling on its Sunni Gulf allies to use their influence with Iraqi leaders to unite and quickly form a government, on the heels of April elections.

The U.S. has also urged Arab nations to work to stop the flow of funds and recruits joining the jihadists in the battles in Iraq and Syria.

King Abdullah on Thursday ordered authorities in the oil-rich kingdom to take "necessary measures" to defend the country from the jihadists battling in Iraq.

The measures were not spelled out but decided during a security cabinet meeting chaired by the king about the impact of events in Iraq on Gulf Arab monarchies.