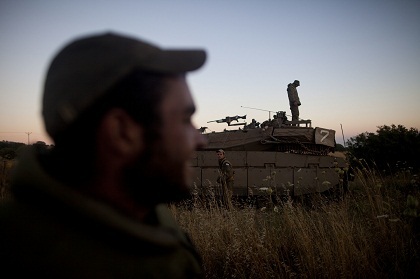 The violence comes a day after Israel accused two men it said belong to Hamas of kidnapping three Israeli teenagers in the occupied West Bank a fortnight ago.

Israel responded to the abduction by staging a vast crackdown on the West Bank network of Hamas, which governed Gaza until a recent Palestinian unity deal was struck, and has arrested hundreds of its Islamist foe's members.

"The remains of two martyrs killed in an Israeli raid on a car were taken to the Al-Shifa hospital in Gaza," health services spokesman Ashraf al-Qudra told Agence France Presse.

The Israeli military confirmed the strike, saying the pair were involved in rockets attacks on Israel over the past week.

Defense Minister Moshe Yaalon said in a statement Israel "will react firmly to any fire at its territory and to any attack targeting Israeli civilians or soldiers, as we did today".

Earlier Friday, five Palestinians in Gaza were wounded by Israeli tank fire in response to the detonation of the border bomb.

Qudra said they were hurt when the tanks targeted "two mosque minarets" east of Khan Yunis in southern Gaza.

An 11-year-old boy was seriously wounded, he said.

The Israeli military said "an explosive device was activated against (army) forces operating adjacent to the security fence in the southern Gaza Strip," causing no injuries.

"The force responded with tank fire towards lookout posts used to guide the attack," it said.

An army spokeswoman said Israeli forces near the border have been targeted by nine explosive devices since the beginning of the year.

While there has been no recent rise in roadside explosions near Gaza, there has been a noticeable uptick in Palestinian rocket fire in recent weeks, leading to air strikes by Israel.

Palestinian medics said the air raids struck near the home of Ismail Haniya, former Hamas premier who stepped down on June 2 when Gaza and the West Bank set up a unity government.

Israel has put Hamas under intense pressure since the June 12 disappearance of the three Israeli teens.

On Thursday, Israel accused Marwan Kawasmeh and Amer Abu Eisheh, two men it said belong to Hamas, of the abduction.

Hamas dismissed that as a front for Israel's "failure" to find them.

Israel has provided no proof of Hamas involvement in the youths' disappearance, and the movement has said it has no information on the incident.

Five Palestinians have been killed in the Israeli security forces' sweeping operations to find the teenagers and more than 400 arrested, mostly Hamas members. Troops have also raided some 2,100 buildings in the West Bank, a military spokesman said.

The protesters blocked off a road and threw rocks at police, who used tear gas and sound bombs to disperse them, without making any arrests.

The broadcaster said Foreign Minister Avigdor Lieberman, head of the hardline nationalist Yisrael Beitenu party, accused the demonstrators of voicing support for the kidnapping of the Israelis and proposed they should be treated "like terrorists".