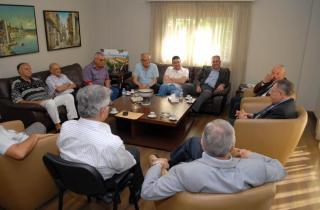 Al-Mustaqbal bloc head MP Fouad Saniora stated on Friday that resisting terrorist operations could be achieved through avoiding the expansion of the Syrian and Iraqi turmoil into Lebanon.

"We have condemned and deplored (the recent) terrorist operations that have nothing to do with religion, ethics or with high standards and morals which the Lebanese have always held onto,” Saniora said after meeting with local delegations in the Hilaliyeh neighborhood of the southern city of Sidon.

"But we must say that an action was and is still being carried out and is dragging the country into areas that do not serve the Lebanese people's interest,” he added.

He explained these actions in terms of Hizbullah's involvement in the fighting in neighboring Syria alongside President Bashar Assad's forces.

"This contradicts with Lebanese principles... and is against the Arab League's Charter, and what the Lebanese people have agreed on especially during the former cabinet's rule which 'invented' the disassociation term,” Saniora went on to say.

"How can you disassociate the country while prominent members in the former and the current cabinet continue to interfere in what is happening in Syria?” he asked.

He continued: “(Hizbullah's interference) is also against against what the Lebanese agreed on during the national dialogue sessions under the chairmanship of the president and produced the Baabda Declaration.”

Therefore, the important and main solution to resolve the problem of terrorist operations taking place in Lebanon would be by first preventing the repercussions of the Syrian and Iraqi “volcanoes,” the former Premier considered, reiterating his calls for Hizbullah's withdrawal from Syria.

"Other efforts should be exerted to promote internal cohesion and preserve civil peace...This is the role of all Lebanese people and parties,” he said.

The Lebanese Army and all legitimate security forces also play a main role in preserving security, he stressed.

On the ongoing vacuum in the presidency, the head of the al-Mustaqbal bloc considered that this reality “is not natural or normal,” adding that the Lebanese must reach an accord to elect a new president.

"All efforts must be directed towards the election of a new president as soon as possible, especially considering the current regional situation,” he said.

"Of course all the Lebanese want a strong president but they disagree on the definition of the word. A strong (president) is one who has leadership skills and a correct vision that is based on the Taef Agreement and on Lebanon's role in the region and the world. He must embrace all the Lebanese and attain more solidarity and consensus among them...,” Saniora elaborated.

No man, we should go fight in syria to defend very humanitarian bachar, and in irak for our brother maliki, all this for the sake of very secular khomaini and while putin is spreading socialism again imperialistic/nazis europeens...
And of course; labayka ya nosroulah...
Now before u go and tell th i'm a takfiri/zionist/imperialist/ksa... Have some chupachups guys, chupachups...

We urge the Parliament to uphold Lebanon’s longstanding democratic tradition and to work to ensure that presidential elections take place as soon as possible and without external interference.

Every single political group that respects themselves 1 iota, every foreign country leader and every true Lebanese has argued to abide by Baabda Declaration. Even Iran has publicly supported Lebanese disassociation from regional conflicts. Yet we have HA still sending naive young lambs to their slaughter and we have aoun telling us he will not support HA withdrawal from Syria because of gains made there. Yet everyone is telling us we want a consensual president. Consensus starts at home and needs to be respected ie: Baabda Declaration. You do not have the right to pick and choose your preference of when and how.

May I suggest changing your nick to 69?