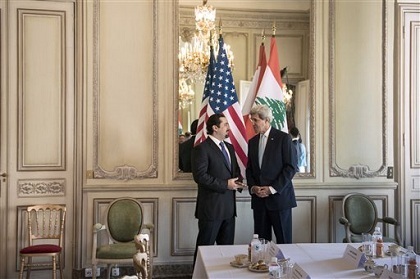 Mustaqbal Movement chief MP Saad Hariri and United States Secretary of State John Kerry stressed during their meeting on Thursday the need to elect a new president for Lebanon as soon as possible.

As Safir newspaper reported on Saturday that the talks “may produce a new international dynamic to deal with the presidential elections.”

“The results of this dynamic will emerge in July,” diplomatic sources revealed to the daily.

Meanwhile, a high-ranking French source told As Safir that the conditions to hold the elections will not “ripen” until autumn, reported the daily An Nahar on Saturday.

It revealed that officials from the French and American foreign ministries recently held a meeting in Paris to discuss the Lebanese file and efforts carried out by Kerry and his French counterpart Laurent Fabius over this issue.

Hariri had held talks with Fabius in Paris on Tuesday.

Kerry had paid a brief visit to Lebanon on June 4 during which he held talks with Speaker Nabih Berri, Prime Minister Tammam Salam, and Maronite Patriarch Beshara al-Rahi.

He highlighted during his trip the negative impact the Syrian crisis is having on Lebanon, urging Hizbullah, Iran, and Russia to help end the war in the country.

He also voiced his concern over the “deeply troubling” political stalemate in Lebanon given the political powers' failure to elect a new president.

President Michel Suleiman's six-year term ended in May with lawmakers failing to elect his successor due to disputes between the rival March 8 and 14 camps.

Seven presidential elections sessions were held without a new head of state being elected.