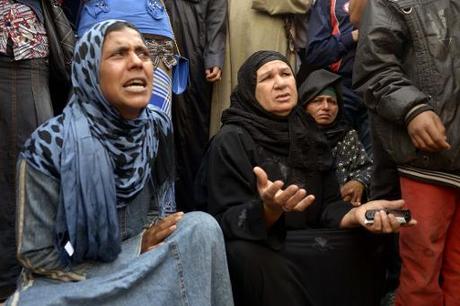 Morsi's Islamist supporters have faced a brutal police crackdown since his ouster by the army last July that has left more than 1,400 people dead and over 15,000 in jail.

Seventy-six students from Egypt's prestigious Al-Azhar university were referred to trial for torching the building of the university's faculty of commerce, the prosecutor general's office said, adding the group included 14 women and a Turkish national.

Morsi's student backers have staged regular demonstrations on university campuses as the police crackdown has weakened their ability to hold large street protests.

Five of the students are also charged with the bombing of a Cairo traffic checkpoint in April that killed a police officer.

Another 17 members of Morsi's Muslim Brotherhood movement were referred to trial in the Mediterranean city of Alexandria for allegedly murdering seven people and attempting to kill another 26, the prosecutor general's office said.

The murders took place on August 15 in Alexandria's Sidi Bishr district, a day after police broke up two camps of Morsi supporters in Cairo, killing hundreds.