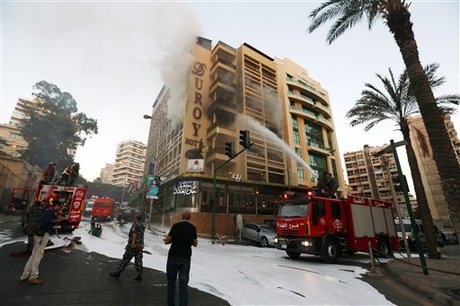 Interrogation with the detained would-be suicide bomber Abdul Rahman al-Shenifi revealed that the Islamic State of Iraq and the Levant is selling oil to finance its terrorist operations, LBCI television reported on Saturday.

“Al-Shenifi revealed that ISIL is selling oil in Syria and Iraq and through this activity has managed to have cash money,” LBCI said.

The would-be bomber also told his interrogators that a Syrian man informed him and his partners in the Turkish city of Istanbul that their mission was to attack security forces and army troops in Lebanon, according to the same source.

But later, al-Monzer al-Hasan, the man who provided the Duroy Hotel bombers with explosives, asked the suicide bombers to change their target and instead attack al-Saha restaurant in the southern suburbs of Beirut.

"Three people went to the restaurant to inspect it and to explore the entrances leading to it,” LBCI added.

Meanwhile, the television channel also revealed that the brother of Duroy suicide bomber Ahmed Abdul Rahman al-Thwaini was recently arrested by the General Security for suspecting that he is a terrorist. He was later released, however.

On Wednesday, a Saudi suicide bomber detonated his explosives at his room in the Duroy Hotel in the Beirut neighborhood of Raouche during a raid by General Security officers.

LBCI reported on Friday that the suicide bomber and his accomplice, who are both Saudis, arrived to Lebanon from Istanbul where they had spent five days.

They said al-Hasan receives $50,000 for facilitating the mission of every suicide bomber.

Yes ksa is sending money, training jihadists and jailing them on their way back,
While iran sends flower only, and bury its matryr in official burials proud of its revolutionary gards dead during jihadist duty..
Southern go hv some chupachups man, chupachups...

isil is not bashar's and maliki's biggest threat, they're objective allies...

Bunch of dysfunctional hoodlums. You people won't recognize God's blessing if it fell on your respective laps in a gift package with a red bow. Once the West and the U.S. (similar to current
Administrations) loose interest and appetite of the venom that is the Middle East, cultures like the Persians and the Turks will rape and subjugate every inch of you because you haven't earned and do not deserve what Earth has given you. The nail on your coffins was the glorious gift of religion which fuels your need to prolong your dysfunctional existence on Earth which in some circles the cockroaches are favored. Your nature is destructive and evil no matter what religion you chose and think to practice. It is not about Sunni or Shiite, etc. If we take the religion away, you will still be who you are and what you represent. Filth. None of you deserve to occupy Earth, let alone, Lebanon.

What Egypt accomplished should be a lesson for all Arabs.

Well said, and my frustrations are meant as a wake up call. No disrespect intended.

I wonder if the occupation of our lands, the defeats of our armies, the assassinations of our leaders, and the rape of our resources have anything to do with our current state of affairs??

Take Iraq for example... After many assassinations and coups by the west, a dictator is installed and maintained in power by the west. After decades of brutal treatment of his own ppl, the west decides to launch two wars against him, further destroying the country. Now look at Iraq.

There's an injustice occurring, and when the gov fails it's ppl, they turn to religion. The fighters u see are fighters, not statesmen. Give us peace and we'll give u statesmen.

Southern. The main financier of daesh is bachar el Assad, the source of all evil.
He won the marketing war by creating an adversary who on the surface is uglier than him.

I have the feeling this whole isil thing is a misstep by Qatar and Saudi. They created something they couldn't control, could explain all the firings and Qatar sheikh stepping down. I don't think it was suppose to get outta hand like this, but to counterbalance the Shia in Iraq.

The 'resistance' buying oil from ISIL, LOL.
Khomeynists and takfiris are definitely brothers, may both be destroyed...

keep water boarding him to get some secrets out of him - then start peeling skin after he reveals them. after that, release the scum bag terrorist with a little bit left so he can tell the other wahabi rodents who he works with what happens when you get caught, perhaps it could serve as a deterrent against terrorism in lebanon.

Once again, the dung-ish outlet of the loud mouth Nawfal Daou allows a headline featuring the "non-existent" ISIL and the "lie" of terrorism (according to Dr. Arreet 7akeh, aka the akkil kh...a who knows not kou3o men bou3o) contradicting the Great Doc of Bull and his khawarif (i.e. his followers, Drs. Arteena Satleh) who call these lunatics REVOLUTIONARIES (or, as they like to call them, their "hol minnina")! What a nerve this Daou fellow has! He shoud be punished by chopping his middle finger, the only thing left of manhood in him.

The argument over the identity of the oil buyers from ISIS is useless. It depends on who you are talking to.
The real fact here is 2 Saudi nationals recruited in Turkey and have a network of personnel in Lebanon. Someone is paying for that and the Turkish intelligence service knows about it.
These are facts otherwise we are living in a lie.
Now, is Turkey doing the same for Syria and Iraq.
I would say yes.
Sunni-terrorism is disease has to be fought mainly by Sunni faith. It is an infection, unless treated and cured, it will infest the whole body.

.....Continue from above
I would encourage our Sunni brethren to take responsibility and tackle the culture of death seriously.
Blaming it on Assad or Maliki is an Israeli propaganda to kill the whole body of Arabic identity.
Please stop arguing and call your Sunni leader and have serious talk

"according to new allegations by Western intelligence agencies, rebels and al-Qaeda defectors"
hahahahahah and he calls that "proof"