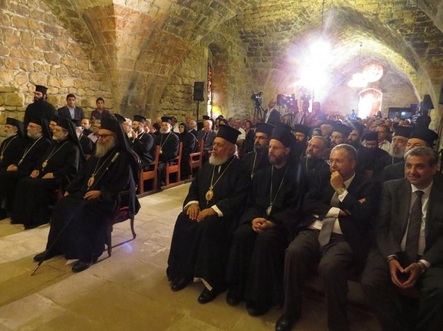 The final statement of the Antiochian Conference stressed the importance of ending the vacancy at the helm of the most important Christian post in the state, calling for the release of all abductees in Syria.

The attendees called on the rival political parties to end the presidential deadlock and seek to elect a consensual president.

They urged officials to maintain civil peace and stability in the country.

The meeting kicked off on June 25 at the Balamand University under the title the "Antiochian unity."

Former President Michel Suleiman left office on May 25 without a successor to lead the state in the coming six years, as differences between the March 14 and the March 8 alliances prevented the election of a new president.

The conferees also urged the international community to seek to resolve the crisis in the neighboring country Syria, calling for peace in the country as it is the sole guarantee for peace in the Middle East.

The conferees slammed the international and local silence, describing it as “shameful.”

The two bishops, Youhanna Ibrahim and Boulos Yazigi, were kidnapped at the end of April, reportedly near the rebel-held town of Kafr Dael, near Aleppo in northern Syria.

Christians account for around five percent of Syria's population. They have become increasingly vulnerable to attack and abductions in the lawlessness that has engulfed much of the country since an uprising against President Bashar Assad erupted two years ago.

Not gonna happen now that THEY are in control, what was old in new again