Iraq Receives Russian Jets as it Takes Fight to Militants 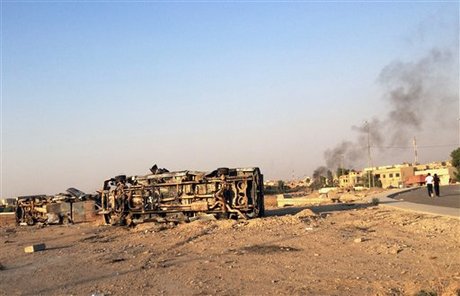 Iraqi forces pressed a counter-attack on Saddam Hussein's hometown of Tikrit Sunday as Russia delivered Sukhoi warplanes to aid Baghdad in what diplomats warn is an existential battle against Sunni militants.

And while beleaguered Prime Minister Nuri al-Maliki has conceded a political solution is necessary to end the crisis, his security spokesman has for days touted the Tikrit operation, which could be crucial not only tactically, but also for morale in the security forces.

"The security forces are advancing from different areas" around Tikrit, Lieutenant General Qassem Atta told reporters. "There are ongoing clashes."

Atta said troops had detonated bombs planted along routes into the city, which militants took more than two weeks ago.

Witnesses reported waves of government air strikes in various areas of central Tikrit and Saddam's palace compound in the city.

The Iraqi forces, according to Atta, are coordinating with recently-arrived U.S. military advisers in "studying important targets."

Iraq took delivery Sunday of the first batch of Sukhoi warplanes from Russia, with the newly-purchased Su-25s expected to be pressed into service as soon as possible.

An Iraqi official said pilots from Saddam's air force would fly the planes.

Su-25s are designed for ground attack, meaning they would be useful for Iraqi forces trying to root out ISIL-led militants from a string of towns and cities they have seized.

Maliki on Thursday announced Baghdad was buying more than a dozen Sukhoi aircraft from Russia in a deal that could be worth up to $500 million (368 million euros).

Washington, which has pushed for political reconciliation in the face of what Secretary of State John Kerry has described as an "existential" threat, has sent military advisers to help Iraqi commanders but has so far not acceded to Baghdad's appeal for U.S. air strikes.

The U.S. has stopped short of calling for Maliki to quit but has left little doubt it feels he has squandered the opportunity to rebuild Iraq since American troops withdrew in late 2011.

American officials have also said a proposed $500-million plan to arm and train moderate rebels in neighboring Syria could also help Iraq fight ISIL, which operates in both countries.

Maliki's security spokesman has said hundreds of soldiers have been killed since the insurgent offensive was launched on June 9, while the U.N. puts the overall death toll at over 1,000, mostly civilians.

World leaders have insisted on a political settlement among Iraq's various communities and Grand Ayatollah Ali al-Sistani, revered among the country's Shiite majority, has urged political leaders to quickly form a government after parliament convenes on Tuesday.

Maliki has acknowledged political measures are necessary, but politicians have nevertheless cautioned that naming a new cabinet could still take a month or more.

Despite unity calls, Iraqi Kurdish leader Massud Barzani has said Baghdad could no longer object to Kurdish self-rule in Kirkuk and other areas from which federal forces withdrew as the insurgents advanced.

Kurdish forces moved into areas vacated by Iraqi federal soldiers, putting them in control of disputed areas that they have long wanted to incorporate into their three-province autonomous region, a move Baghdad strongly opposes.

Smoke out all of the terrorists and their gimps like RFT iceman and his blow up doll Kate hiding in California.

Maliki gets Russian Jets to fight off ISIS. See how the International Powers have lined up?? Iran and Russia with Maliki. KSA/Qatar and the US with ISIS. ISIS (Sunni) takes on the Axis of Resistance Powers of Iran/Maliki/Assad/Nasrallah(Shia). The idea is to reverse the strategic outcome of the Second Iraq War in which Iran (Shiites) came out on top with Iran piecing together its "Arc of Resistance". This newest little war brings Iran back to earth by disrupting its land routes, putting a Sunni power with money, weapons and fighters from Aleppo to Baghdad and bringing Hezbollah out even further from home base in Lebanon to fight "tikfiris". Significant that Baghdadi said he was going for Karbala rather than Baghdad. It is sure that Hezbollah will come to defend Shia shrines, not so much Baghdad.

With Hezbollah stretched, its Lebanon's time to step up and bring them back down to size in Lebanon with the election of a Lebanese president not of Nasrallah's choosing. Nasrallah wants Jean Qahwaji, since as Army Chief he has coordinated well with Hezbollah. This is Assad's choice as well. Michel Sleiman, likewise, an Assad choice as was Emil Lahoud. Nasrallah uses Aoun's blocking maneuvers to stall the selection until a consensus can be built around Qahwaji, based on recent actions of the LAF, ISF and security forces to "foil" terrorist activity in Lebanon, planted no doubt by Hezbollah, tipping off Lebanese security forces so as to built the Qahwaji resume for the US and France and KSA to come to the Hezbollah choice.

Should Hezbollah get its choice in the Lebanese Presidency, this will leave them free to pursue Iran's sectarian wars against ISIS in Iraq and Syria, confident that Qahwaji is minding the store back in Lebanon and taking care, as a trustee, of Hezbollah interests there.