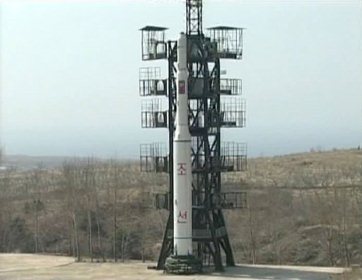 North Korea Sunday fired two ballistic missiles into the sea, Seoul's military said, in an apparent show of force ahead of a visit by Chinese President Xi Jinping to the South.

"Both landed in international waters beyond its sea border," the official said.

He did not elaborate on the type of the missile. But Yonhap news agency, citing a military official, said they were short-range Scud missiles with a range of about 500 kilometers (300 miles).

The launch came three days after Pyongyang fired what were believed to be three short-range missiles into the sea on Thursday.

The North did not officially confirm Thursday's launch but a day later, the state-run Korean Central News Agency hailed what it called the successful test of "cutting-edge" and high-precision missiles, watched by leader Kim Jong-Un.

The launches come only days ahead of Xi's state visit to Seoul to discuss issues including the North's disputed nuclear weapons programs.

The July 3-4 trip -- Xi's first presidential journey to the Korean peninsula -- also marks the first time in almost two decades for a sitting Chinese leader to visit the South before having been to the North.

China is the isolated North's sole major ally and major economic lifeline that offers precious fuel and food to its wayward ally.

But ties have been tested by the North's pursuit of nuclear programs in defiance of pressure from the international community including Beijing.

The North staged its third atomic test -- its most powerful so far -- in February 2013, triggering new sanctions and condemnation by U.N. Security Council members including China.

The latest missile launches were aimed at increasing pressure on Xi and South Korean President Park Geun-Hye ahead of their talks, said Shin In-Kyun, head of Korea Defense Network, a Seoul-based think tank.

"The two leaders will inevitably discuss how to curb the North's nuclear ambition and how to punish Pyongyang if it pushes ahead with the weapons program," Shin said.

"And the North is sending a message of warning in advance, to prevent the leaders from criticizing Pyongyang too harshly," he said.

Tokyo protested at the launch but said it would still go ahead with rare government-level talks with North Korea in Beijing this week as scheduled.

"Japan for its part lodged a stern protest with the North Korean side through embassy channels (in Beijing)," Foreign Minister Fumio Kishida told reporters.

He said Tokyo would raise missile and nuclear weapons issues at the talks Tuesday, which concern North Korea's abduction of Japanese citizens during the Cold War.

A North Korean foreign ministry official told Japanese broadcaster NHK in Pyongyang that the launch seemed to be a routine military drill and was unlikely to have any particular impact.

- Calls for China to pressure North -

Seoul and Washington have persistently called on Beijing to exert more pressure on the North to abandon its atomic weapons program.

But despite China's growing frustration with the North, it fears the instability -- and flood of refugees -- that a collapse of the regime would bring.

The North has often launched short-range missiles or rockets to express anger at perceived provocations, including military drills held south of border.

In March, it launched Scud missiles and rockets to coincide with annual joint army drills between Seoul and Washington.

The North also test-fired two medium-range ballistic missiles that flew 650 kilometers off its east coast, prompting a stern reaction from Washington and Seoul.

Cross-border ties have been icy for months, with the two Koreas accusing each other of raising tensions near the maritime border.

Most recently, the North's army threatened Thursday a "devastating strike" against its South Korean counterpart for holding another live-fire drill near the flashpoint border in the Yellow Sea.

In March, the two sides traded hundreds of shells across the border off the west coast after the North dropped shells in the South's waters during a live-fire drill.