At Least 11 Dead, Others Trapped in India Building Collapse 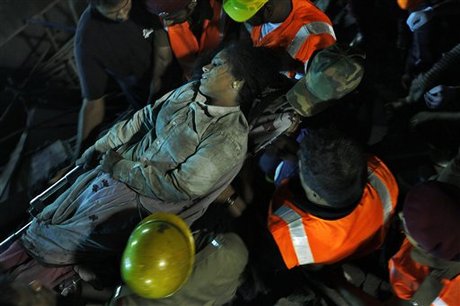 The accident late Saturday was India's second deadly building collapse in one day, after a dilapidated apartment block crumbled in the capital New Delhi, killing ten people including five children.

The partly-built tower, about 20 kilometers (10 miles) from Chennai in Tamil Nadu state, crushed mostly laborers at the site who had gone inside it to shelter from the rain.

Senior police officer Karuna Sagar told Agence France Presse that 11 bodies had been pulled from the wreckage as of Sunday afternoon while 20 people had been rescued and were being treated in hospital.

He said police had detained several people for questioning, including the builder and construction engineers.

Sagar said witnesses had described hearing a loud bang, with the building collapsing after around 50 workers went inside it to seek shelter.

He said dozens may still be trapped.

TV and still footage showed crowds of yellow-helmeted rescuers searching the ruins -- huge slabs of concrete which had pancaked onto each other, twisted steel reinforcing rods and tangled scaffolding.

Rescuers sifted through the debris with shovels as they searched for trapped survivors.

Dust-caked bodies of the dead and injured were carried out on stretchers as rescuers struggled to make their way through  mounds of rubble.

A disaster management official leading the search called the operation a "big challenge" and said clearing the debris could take a few days.

"There is no clarity on the number of people trapped," S. P. Selvan, a senior officer from the National Disaster Response Force, told reporters in Chennai, according to the Press Trust of India.

In September last year more than 50 people were crushed to death when a five-story building collapsed in India's financial capital of Mumbai on the west coast.

"We will look into all aspects of planning permission and quality of construction, the structural aspect and the soil condition and see what's wrong," Sagar told the NDTV television station.

Tamil Nadu Chief Minister Jayalalithaa Jayaram announced compensation of 200,000 rupees ($3,000) for the families of the dead and 50,000 rupees for those injured.