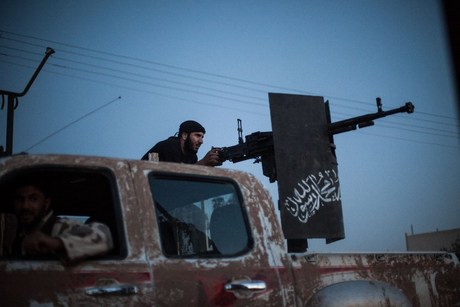 Activists in Raqa, a stronghold of the Islamic State (IS), said Monday the jihadists have locked down the Syrian city and are shipping in new weapons, including missiles from Iraq.

"All roads leading in and out of Raqa city have been closed. Nobody can enter or leave Raqa at all right now," said Hadi Salameh, speaking to Agence France Presse via the Internet.

"They also brought in surface-to-surface missiles," said the activist, using a pseudonym to protect his identity.

An image sent to AFP by the activist showed a large missile mounted on the back of a military vehicle in the north Syrian city, in broad daylight.

The Syrian Observatory for Human Rights also reported the influx of arms.

Its director Rami Abdel Rahman said: "The Islamic State is bringing in heavy weapons from Iraq to Raqa every day. The group has all the trappings of a state except an air force."

The reports come a day after the jihadist group announced the establishment of a "caliphate" led by its shadowy chief Abu Bakr al-Baghdadi, referred to as "caliph Ibrahim".

A caliphate is an Islamic system of rule that became obsolete with the fall of the Ottoman empire nearly 100 years ago.

On Monday, the second day of the Muslim fasting month of Ramadan, the group "detained three young men, accusing them of not observing the fast", the Observatory said.

The extremist group was once welcome in Syria by some rebels seeking President Bashar Assad's ouster, but its systematic abuses and its quest for domination turned the opposition against it.

The group has been fighting Syria's rebels, including other Islamists, since January, but has retained control of Raqa as well as large swathes of Deir Ezzor near Iraq and parts of Aleppo province in the north.

Despite its overall unpopularity among Syrians, it has maintained a firm grip in areas under its control.

A recent offensive in Iraq spearheaded by IS saw the group capturing heavy weapons seized from fleeing Iraqi government troops.