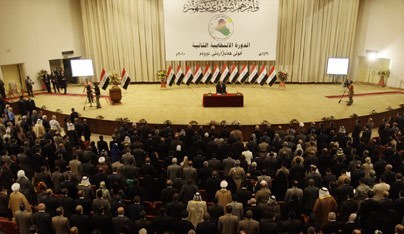 Iraq's new parliament broke up in chaos Tuesday, with lawmakers walking out and making threats despite global calls for the formation of a government needed to face a Sunni militant onslaught.

After a break called to calm soaring tempers, so many Sunni and Kurdish deputies stayed away that the quorum was lost, so a speaker could not be elected as was constitutionally required, and the session ended in disarray.

Prime Minister Nuri al-Maliki's bid for a third term has been battered by the jihadist-led offensive that has seized large chunks of five provinces, adding fuel to dissatisfaction over persistent allegations of sectarianism and monopolizing power.

The crisis has alarmed world leaders, displaced hundreds of thousands of people and polarized Iraq's Shiite, Sunni and Kurdish populations.

The disunity quickly manifested itself in what was the opening session of a parliament elected in April, which included walkouts, threats and confusion over the constitution.

Kadhim al-Sayadi, a lawmaker in Shiite premier Maliki's bloc, responded by threatening to "crush the heads" of the country's autonomous Kurds, who look increasingly likely to push for independence.

That was reinforced when their leader, Massud Barzani, told the BBC they would hold a referendum within months on independence.

Some Sunni MPs walked out of the chamber when mention was made of the Islamic State (IS), the jihadist group leading the anti-government offensive, and enough Sunnis and Kurds did not return following a break that Tuesday's session was without a quorum.

Presiding MP Mahdi Hafez said the legislature would reconvene on July 8 if leaders were able to agree on senior posts.

Under a de facto agreement, the prime minister is chosen from among Shiite Arabs, the speaker from Sunni Arabs and the president is a Kurd. All three posts are typically chosen in tandem.

U.N. envoy Nickolay Mladenov slammed the parliament, saying "politicians in Iraq need to realize that it is no longer business as usual."

He called for a speaker to be elected next week, and said "any delay or failure to observe the deadlines set by the constitution will be detrimental to the country’s integrity."

It increasingly looks as if Maliki is on the way out.

The premier faces criticism from all three major communities over allegations of sectarianism, sidelining partners and a marked deterioration in security that culminated in the June 9 launch of the militant offensive.

Even so, Maliki's bloc won by far the most seats in April.

"This has become a much more competitive race for the premiership," said Ayham Kamel of the Eurasia Group consultancy.

"The broad direction here is to be more inclusive, at least when it comes to the Sunni community, and figure out a power-sharing deal."

Though the vast majority of Iraq's Sunni Arab minority do not actively support the militants, analysts say their anger over alleged mistreatment by the Shiite-led authorities means they are less likely to cooperate with the security forces, fostering an environment in which militancy can flourish.

Kamel noted that any military successes could boost Maliki's chances, with thousands of troops taking part in an ambitious operation aimed at retaking the city of Tikrit, which fell on June 11.

Iraqi forces initially wilted in the face of the onslaught but have since performed more capably, with officials touting apparent progress toward recapturing the city.

However, the cost has been high. Nearly 900 security personnel were among the 2,400 people killed in June, the highest figure in years, according to the U.N.

Loyalists are battling militants led by the IS, which Sunday declared a "caliphate," an Islamic form of government last seen under the Ottoman Empire, and ordered Muslims worldwide to pledge allegiance to their chief.

Though that may not have significant immediate effect on the ground, it is an indicator of the group's confidence and marks a move against al-Qaida, from which it broke away.

Iraq has appealed for the U.S. to carry out air strikes against the jihadists. Washington, which further beefed up security at its embassy Monday, has so far not acceded, and said planned deliveries of F-16 fighter jets could even be delayed.

Baghdad has already purchased more than a dozen Russian warplanes to bolster its fight against militants holding a string of towns and cities.

that would be too good. wouldn't it?