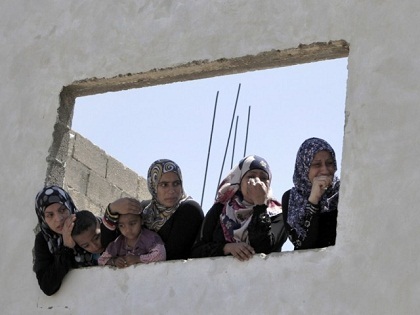 A Palestinian teenager was kidnapped and killed Wednesday in an apparent act of revenge for the murder by militants of three Israeli youths, triggering violent clashes in east Jerusalem.

Netanyahu also condemned the "despicable murder" and ordered investigators to work "as quickly as possible" to track down the perpetrators, while urging both sides "not to take the law into their own hands".

Eyewitnesses told AFP 16-year-old Mohammed Abu Khder was seen being forced into a car by three Israelis in east Jerusalem.

And police confirmed a body had been found in a forest in Givat Shaul in west Jerusalem, although they refused to link the two incidents.

However, DNA tests proved the body was that of the missing teenager, his father said.

"The body belongs to my son," Hussein Abu Khder told AFP, saying his identity had been confirmed through tests but the cause of death was not immediately clear.

The attack is widely believed to have been carried out in revenge for the kidnap and killing of three Israeli teenagers by Palestinian militants, with Israeli police raising the alert to the second highest level across the country.

Shortly after dawn, crowds of angry Palestinians began gathering outside the teenager's home in Shuafat, with violent clashes erupting at 8:00 am (0500 GMT) and showing no sign of easing some eight hours later.

Clouds of black smoke rose into the sky as hundreds of masked Palestinians hurled stones at Israeli police in riot gear, who responded by firing rubber bullets, tear gas and sound bombs.

The Red Crescent said at least 65 people had been hurt in the clashes, three by live bullets. At least 35 people were injured by rubber bullets, including six journalists.

The normally-bustling main road through Shuafat was littered with stones and the light rail service which passes through the neighborhood was suspended. Clashes were also reported in the neighborhood of Ras al-Amud near the Mount of Olives.

As concerns about further attacks grew, Israel police raised the alert to the second highest level.

Jerusalem mayor Nir Barkat denounced the murder as a "horrible and barbaric act" and called for all sides "to exercise restraint".

Tensions have soared across the region since June 12 when three Israeli teenagers disappeared while hitchhiking in the West Bank. Their bodies were found on Monday, with Israel blaming Hamas and vowing to hit it hard.

Calls for revenge followed, with more than 200 Israelis rampaging through Jerusalem on Tuesday evening, dragging people out of cars and chanting "Death to Arabs," police and witnesses said.

As the clashes raged in Shuafat, where the streets were littered with burning dumpsters and makeshift barricades, the only place of relative calm was the family home.

Wearing a blue headscarf, 40-year-old Suha Abu Khder, mother of the missing teen, sat in stunned silence, sometimes breaking down in tears in a room filled with relatives and friends.

Ansam Abu Khder, one of the teenager's cousins, said witnesses had written down the car's license plate number and police were examining CCTV footage.

"We knew about Mohammed's kidnapping by three Israelis just before the dawn prayers. A witness saw them," he told AFP.

In a related development, police also spoke to another Shuafat family who had on Monday reported an attempt to snatch one of their children, the father told AFP.

Family of 16-year-old Naftali Frenkel, one of the three murdered Israeli teenagers, issued a statement condemning the incident as a "horrendous act".

"If the Arab youth was murdered because of nationalistic motives then this is a horrible and horrendous act," it said.

"There is no difference between Arab blood and Jewish blood. Murder is murder. There is no forgiveness or justification for any murder."

But Hamas, accused by Israel of the triple killing, vowed Israel's government would pay for the Palestinian teen's death.

"We send our message to the Zionist entity and its leaders, which hold direct responsibility (for the murder), that our people will not let this crime pass," he said.

"You will pay the price for these crimes."

Also on Wednesday, suspected Jewish extremists set fire to the ground floor of a house in the West Bank village of Aqraba near Nablus, writing "Revenge of the Jews" in Hebrew on the wall, police said.

Phillipo and greatpierro... that's 2 teenagers in 2 days. What's your guess for the final tally in 2 weeks?

What can I say. It is disgusting. What is even more disgusting is that the Israeli police will not put much effort to look for the killers and the Arabs will carry on being treated as second class inhabitants

In Israel they believe in the Mosaic law of retribution, to the 10th power. If you kill one of ours, we kill 10 of yours in retribution since it takes 10 Palestinian lives to equal one Israeli life. And what does retribution bring, but retaliation by the Palestinians. And so they destroy their country and kill their people and call it law.

There is suspicion that Israeli people committed the crime because a Jewish radio station was playing in the background. Research it. Also, you people should go on 4chan /pol/, a lot of Palestinians and smart people, great way to find news ahead of time. (sometimes it is false.)

Hamas is to be blamed for this, They should not have killed the Jewish boys. The arab youth murder was a reactionary response by imature people.

I wonder what would happen if people would just leave Israel alone. But that would never happen since you are taught to hate Israel from childhood. Imagine hate in your soul where the "worm dieth not"

why can't muslims and jews teach peace and love like christians..
i'm not religious, but i can clearly differ between the 3 abrahamic religions.
just look at the islamic states and israel.

really? what about the last 2000 yrs or WW1 or WW2 or the European christian feudal wars tgat killed millions ??? inquisition any body? how bout burning woman and if they dont burn they are not witches? ring a bell?

So, what you really are saying that they are killing each other because they are involved in a conflict which is grounded in their respective reality and believes, and each side wants to have their cake and eat too instead of sharing. What true compelling reason can we think of to favor one side over the other? This conflict must be limited to the two parties and leave Lebanon alone as Jordan and Egypt have cleverly done. Us Lebanese must unequivocally insist the closure of Palestinian camps and their ouster from Lebanon to shield us from the consequences of their despicable behavior.