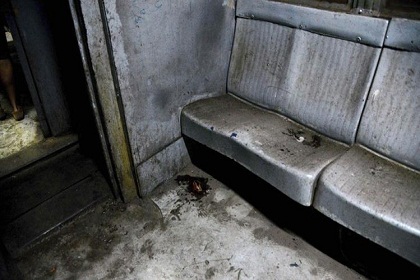 A bomb blast in a train and clashes between protesters and security forces rocked Egypt on Thursday, as police quashed demonstrations marking the anniversary of Islamist president Mohamed Morsi's ouster.

The violence came as the pro-Morsi Muslim Brotherhood-led Anti-Coup Alliance issued an aggressive rallying cry demanding a "day of anger" to mark the occasion.

Nine people were wounded when a bomb hidden in a briefcase near a passenger seat exploded inside a train compartment in the Mediterranean city of Alexandria late Thursday, security officials and state media said.

One person was killed by gunshot during clashes in a Cairo district as pro-Morsi supporters fought with police, while a policeman was killed also by gunshot when his checkpoint was torched by protesters late Thursday in the capital, security officials said.

Three other policemen suffered burn injuries when the checkpoint was torched.

Police closed off several main squares in Cairo and scoured neighborhoods to head off protests earlier on Thursday.

Thirty-nine wanted activists were arrested ahead of Thursday's protests, and more than 200 allegedly illegal demonstrators were detained during the day, the interior ministry said.

The ministry of health said at least 24 people were wounded in clashes nationwide.

The Muslim Brotherhood was listed as a terrorist group after Morsi's overthrow on July 3, 2013 and many of its leaders, including the ex-president himself, have been jailed and are on trial.

The ex-army chief who toppled him, Abdel Fattah al-Sisi, has been elected to replace him.

Security forces were also on high alert for further bombings, days after two senior policemen were killed when devices they were defusing outside the presidential palace exploded.

Since Morsi was deposed after a turbulent year in power, at least 1,400 people, mostly his Islamist supporters, have been killed in street clashes and more than 15,000 imprisoned.

Despite the crackdown, the Islamists have insisted on continuing their protests with the aim of making Egypt ungovernable for Sisi.

"The July 3 uprising (Thursday) will mark a start that will not stop ... and tomorrow will be an imposing Friday of rage," the Islamist Anti-Coup Alliance said in a statement calling for new protests.

Meanwhile, militants have launched scores of attacks that killed several hundred policemen and soldiers, mostly in the restive Sinai Peninsula.

Rights groups say the crackdown targeting Morsi supporters has been the bloodiest seen in Egypt in decades.

Among the Brotherhood leaders arrested is its supreme guide Mohamed Badie, who was sentenced to death in a speedy mass trial.

"A surge in arbitrary arrests, detentions and harrowing incidents of torture and deaths in police custody... provide strong evidence of the sharp deterioration in human rights in Egypt in the year since President Mohamed Morsi was ousted," Amnesty International said.

The repression has further divided Egypt, a regional powerhouse and the Arab world's most populous country, as a fast-growing population of 86 million stretches its dilapidated infrastructure.

The military removed Morsi after days of huge protests demanding the resignation of the polarizing Islamist.

Almost 23 million voters went on to endorse Sisi in a May presidential election against a token leftist candidate.

Sisi's supporters view him as a strong leader who can restore stability in the often tumultuous country.

Yet the Brotherhood, which had won every vote since an uprising toppled veteran strongman Hosni Mubarak in 2011, still commands a loyal following.

"Let us turn our wealth of revolutionary defiance into an overwhelming power," the Anti-Coup Alliance said Wednesday.

That night, two men were killed while apparently preparing an explosive device in an apartment south of Cairo, security officials said.

In the capital itself, a small bomb went off inside a car near a military installation late Wednesday. Police arrested a man who was in the car, but another escaped.

The government says the Brotherhood has been behind militant attacks, a charge the group denies.

What a lovely bunch of God fearing people. Now all they need is to carve out a little patch of heaven for the sisters to join the so called brotherhood.

Hemm, lets see? Bombing innocent people in a train in the name and under the banner of God and religion. Your intended insult is outweighed by your pathetic attempt. You're left with nothing but appealing to me hopelessly trying to rebut my claim by criticizing and denigrating me rather than dealing with my claim itself. They call this a fallacy. Truth hurts, doesn't it?