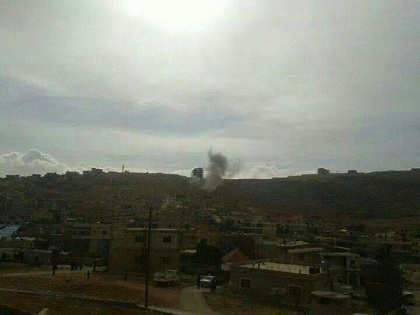 Two Syrian nationals were killed on Friday and and five other people wounded in five air raids staged by the Syrian regime on the outskirts of the eastern border town of Arsal.

Media reports said that the raid targeted the Wadi al-Ajram area, 7 kilometers into the Lebanese depth.

A Syrian family, comprised of a father and three children, was passing in the area when the raid took place.

NNA said that the injured were transferred to al-Rahma field hospital in Arsal.

The army later issued a communique confirming the air raids without providing any details.

“At 8:55 am and 10:15 am Syrian warplanes targeted several border areas in the outskirts of Arsal,” the army said.

Arsal, near the border with Syria, is a Sunni town where residents support the rebels fighting President Bashar Assad's forces. The town also hosts tens of thousands of Syrian refugees.

Ever since the Syrian revolt erupted in March 2011, Arsal has become a key conduit for refugees and wounded people fleeing strife-torn Syria.

where is the Aerial defense of lebanon, where is our army.
get the syrian back to where they belong and fortify our borders

once again with the full support of M8 who consider Lebanon as a syrian province so no violation of the airspace lOL!

why dont we complain to the UN?
Isreal is flying reconaissance as for syria its not only flying but as well bombing us... OH I forgot its a brother bomb!