SNC to Bassil: Press Your 'Terrorist Ally' Hizbullah to Withdraw so that Syrians Can Return Home 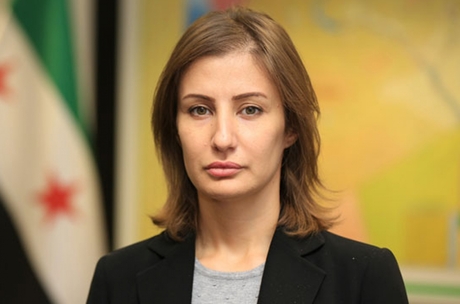 The opposition Syrian National Coalition on Friday snapped back at Foreign Minister Jebran Bassil, calling on him to press Hizbullah to withdraw from Syria “instead of launching verdicts against Syrian refugees.”

“Once again Lebanese Foreign Minister Jebran Bassil comes up with a number of fallacies that contradict with the living situations of Syrian refugees in Lebanon,” Coalition member Alia Mansour said in a statement.

“He has gone too far to criticize the deliveries of pregnant Syrian women in Lebanese hospitals and to voice concerns over the education of Syrian children fleeing the death verdicts issued by the Assad regime, with which Bassil has allied against the entire Syrian people,” Mansour added.

Earlier on Friday, Bassil warned of a “veiled attempt to naturalize the refugees" through creating camps inside Lebanese territory.

But Mansour called on the Lebanese minister to “press his terrorist ally Hizbullah to withdraw its militias from Syria so that Syrians can return home instead of launching his verdicts against Syrian refugees.”

“Despite the bill that is being paid by the Lebanese people, we remind that Syria's people are being killed on daily basis at the hands of the Syrian regime,” Mansour said, wondering if it's logical to “deprive these people of their natural right to escape this death.”

She reassured that the Syrians do not want to be naturalized in Lebanon.

“They have a homeland and they insist to return to it to rebuild it after it was destroyed by the Assad regime,” Mansour said, noting that setting up camps on the Lebanese border would “alleviate the burdens of the refugee influx on the Lebanese, organize aid and help obtain greater assistance.”

Bassil had warned that the Syrian refugee crisis may lead to "strife" in Lebanon between Syrians and Lebanese should it remain unsolved.

"We believe the situation has reached breaking point, and I am echoing the words of security officials," he said.

To highlight the scale of the influx, Bassil compared it to transferring the entire population of Romania to Britain or France.

Bassil spoke at a news conference focusing on the refugee crisis a day after the United Nations warned that Syrian refugees will comprise more than a third of Lebanon's population by the end of 2014.

Calling for the number of Syrian refugees in Lebanon to be reduced, Bassil said they should not be helped financially because "that encourages them to stay."

He also said the number of Syrian children in public sector primary and middle schools stands at 88,000 -- 3,000 more than that of Lebanese and other foreigners combined.

The medical sector has also been affected, Bassil said, noting that in one of Beirut's biggest hospitals, "80 Syrian children were born in May, compared with 40 Lebanese children."

He bemoaned the financial burden borne by Lebanon because of the refugee crisis. "Lebanon pays $100 million a month to provide free electricity to Syrian refugees," said Bassil.

He also said an international fund set up to help Lebanon get through the crisis has only been given limited support, and that "even if funding reaches $100 million, that will barely be enough to pay for a month's power."

Bassil is a shameful incompetent person and an embarrassment to humanity.

Well bassilo and friends keept saying that there was nothing in syria and the guys are coming for vaccation during more than a year after syrian uprising started just that they can back up their saying in front of the international comunity..
Now that we have let the syrian refugies with no assistance, now that they r leaving on the streets seeking sheltter, food, medicine..he is still against making camps, but what does he really wants, we send them by force to get killed by assad or hezbos/iraki/iranian mercenaries? We throw them in the sea?
U are a shame bassilo, a shame that has got so much wealthier than some time ago when tayyar flag was bearing the omega sign of resistance, resistance against the sme regime that u r now supporting, the same regime that has oppressed syrian and lebanese (and palestinian), just a disgrace..
Chupachups bassilo, chupachups...

ur so quick to talk about iran, well why doesnt saudi arabia or jordan take them? cant u see lebanon is poor and has its own problems, but u want to brinnig syrians on top of that? they keep reproducing in this land and we are supposed to take care of them? go put them in ur house in that case

And by the way, she looks like a true terrorist like hariri, alouch... They could hv chose better:like m8 alternatives:hachem minkara, saiid chaaban...
Yalla chupachups for all...

I hope u will never have to be displaced defacto, that ur house will never be distroyed, than ur familly wont be hurt , that u wont have to seek shelter -and if u do i hope the country u will be in will treat u better than we are treating those poor people oppressed by the same regime that has oppressed us for decades...
Now go have some chupachups man, really..

And of course have some chupachups...

First thank you for u respect..
Now with all due respect if u have lived all this (like most of us including myself) if u have suffered the loss of all u had, if u have asked for refuge for u and ur famillu and u still keep this unhuman ideas u must seek couceling bro..

First i'm not muslim so don't asssume things
Second i'm with palstinian right of palestinian state (not at the expences of lebanon but i'm fir sure fir they right to hv a state)
Third if u suffer so much, and i might be wrong but i assume u suffered from assad or his likes bc u had to live abroad, so how can u wish so much bad for people tuning away from the same regime that has percecuted our country for decades?????
U don't even deserve a chupachups john.....

Ok no more chupachups for u today..

U came with all this by urself?
Well u r right, nassrallah defenetly look nicer, and of course all takfiri/qaida/da3ech.. Like hariri, alouch, all march 14, in fact like all who doesnot think like u...and thank u for ur alternatives; hachem minkarar, saiid chaaban..the real modern/secular/democratic guys (just like nassralah, khomaini..)
Bravo john, now go gave some chupachups...

Uff u were talking about only syria with no thinking about lebanon at all...
Sorry big john.. Anyway then try to extend ur imagination a litle more, maybe u will see the all picture better...
And go ahead, have a chupachups..

Ur a leftist and u support hezbollah islamic reistance u support a religious military force taking over lebanon after taking the resistance executing leftists, taking over southlebanon, u support resistance??
U support assad resistant regime who split palestinian resistantss(fateh/fateh el intifada, fplp/fplp-general comand...) a regime that has put opoosants in general leftists (riad el turk for exemple..)
U support the guys accused to be behind hawi/kassir... Death???
U r truely a great rleftist resistant..
Now really go have some chupachups gevara would be proud of u...

Wouw what a reply..
firs the march 8 resistant guys were not petrodolar ksa hariri style, they are so clean, so poor, so transparant and democratic..
Second: Kassir was not a leftist hawi neither riad al turk neither nor kaim mrouweh nor all who signed el3wen beirut/dimashk all actualy zionist/imperialists/takfiri...
U r right, u r the true lebanese partiotic resistance front; WOU LABAYKA YA NASROULAH...
No more chupachups for u man.. No more chupachups..

What Lebanese republic? As if the Hizb took the permission of the republic to take over Lebanon and then go into Syria and support a murderous regime.

U must be wrong tex, more syrian participated in those very democratic elections than the last time..
Anyway christians at least some of them as well as in lebanon have taken a clear stance against assad regime, i hope all would have donne the same...anyway being a secular person insee no difference sunis fanatics (da3ech nosra..) chiite fanatics (hezbollah...) chistian fanatics (crazy aoun...) all the same..
Yalla chupachups for all..

Bigjohn fo watch unhcr statistics and get ur head out of newtv and sometimes sana/ov/al manar stuff...
And of course, chupachups...

The Office for the Coordination of Humanitarian Affairs (OCHA) has estimated that, by the end of 2013, 6.5 million of Syria's 22 million population will be affected and in need of humanitarian assistance, including 4.25 million internally displaced. Of the 4.25 million IDPs, UNHCR will assist up to 3.3 million (660,000 families) in all sectors. Overall planning concerning internal displacement has been made with the assumption that Syrian refugees and IDPs will not return to their home areas in significant numbers in 2014.

http://data.unhcr.org/syrianrefugees/regional.php
And there is nice graphs if u have a visual memory...
So again UNHCR not SANA...
Or unhcr might also be a takfiri/imperialist/ksa/zionist entity....
Like anyone out of the moumana3a resistant axes...
Really, please, go have some chupachups man..

Wow! Am with Alia all the way! Much better looking than Gerban Barteel.

I love how the FSA-Al Qaeda jihadist terrorists use a woman here as a way to mask their intentions of establishing a Salafist caliphate and their intense hatred for Christians, Shias, and Alawites. Next thing you know, this woman is beheaded (and her heart eaten, of course).

resistance
right on I would too!!

To defacto and imagine, it is not entirely correct to say that "everyone is entitled to his/her opinion." Just as no one has the right to commit an immoral act, similarly, no one has the right to have an immoral belief or opinion. Having said that, the sheer number of Syrian refugees on the shoulders of Lebanon on top of the already existing Palestinian camps, gives every true Lebanese the right to tip the balance of this moral dilemma in favor of Lebanon. May be it would have been easier to justify the argument in favor of the Syrian refugees if their numbers were manageable, and Lebanon was not already burdened by equally serious deadly consequences of the Palestinian threat.

Qawmi John losing his paid so called mind again on a Syria story.

It is a matter of time before the terrorist regime get to her and assassinate her simply for speaking out even if it was a lie. A regime that operated like that for yrs(I.e. Ghazi Ken3an and etc) and a local militia that operates same way in Lebanon (I.e. All anti Syrian political assassinations) cannot coexist with the rest as their only language hey speak of is death and terror which creates extremism similar to Israel story with the Palestinians.

Speak for yourself Salafist. The majority of non-Al Qaeda sympathizing Lebanese do not wish to see the FSA-Al Qaeda jihadist terrorists prevail and for a Salafist caliphate to emerge in Syria.

How about the SNC pressing themselves to represent somebody in Syria other than their individual nobodies?

refugee or not, she's still syrian and her people are victim of ur khomeynist boyfriends with tatoos and dirty teeth...

who told u that the coalition is salafi ? almanar ?

this woman used to be a repoter at future tv, her name is alia mansoor