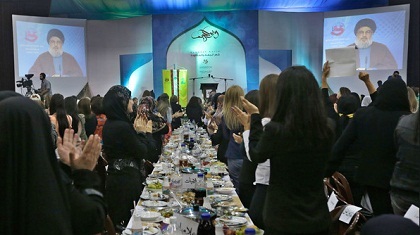 A decision by Shiite parties Hizbullah and AMAL to cancel daily iftars held throughout the holy month of Ramadan over security fears angered charities, al-Joumhouria newspaper reported on Saturday.

There are fears that terrorists may infiltrate such events and blow themselves up.

Charities usually depend in their work on the donations offered during iftars.

The newspaper said that the relations between Hizbullah and Fadlallah and Qabalan deteriorated due to the decision, citing the party's intervention in the war raging in neighboring country Syria.

This the first time in several years that these organizations have canceled the iftars that were held even during the worst years of the civil war.

Last week, AMAL Movement announced that it is canceling all iftars that were scheduled to take place in different Lebanese regions “to preserve the safety” of the attendees.

However, no official statement has been issued by Hizbullah to confirm the decision.

A group calling itself the state of Damascus-Qalamoun recently vowed to carry out more attacks against Hizbullah and its agents.

I shouldn't say Shia in general of Lebanon, moreso the Iranian implants. HA brought in on themselves, it's obvious, now they're stuck dealing with the consequences of this primitive feud. I feel more sorry for the regular Shia of Lebanon during this time, as they have to pay for Iran's mistakes. Let's not forget what happened when the normal Shia of Lebanon protested in front of the Iranian embassy not too long ago, all those "righteous" HA implants showed up, the wrest wrote itself. Anyhow implants, enjoy what you've caused.

It seems that we have
Karim.
Karim..
Karim-

Flamthrower is another problem here too....

Go blow yourself up in a Sunni mosque terrorist

Keep it up people and soon we will all be standing in line for bread again. It'll be like fasting for ramadan but every day of the year.

I am disappointed with my muslim brothers and sisters (both shiaa and sunna) after seeing this picture.

There are a multitude of refugees in Lebanon living a miserable existence right now. I'm sure they would like to share a similar iftar experience.

Not to get all christian on everybody, but I get disappointed at how much the muslim community barks about Iraq, Palestine, etc. while they have several muslims right next door that they can help with food and a hug. No need for guns. I don't see media headlines of competing M8 and M14 food trucks handing out free food and zakat for those that need it.