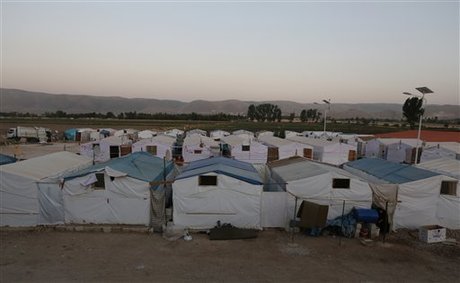 Social Affairs Minister Rashid Derbas denied on Saturday any rift with Foreign Minister Jebran Bassil, stressing that the cabinet had agreed to establish camps for Syrian refugees outside Lebanese territories or in buffer zones along the border with Syria.

Derbas ruled out in remarks published in local newspapers the differences with Bassil over the appropriate ways to resolve the crisis.

The cabinet is mulling the establishment of camps in buffer zones between the Lebanese border crossing al-Masnaa and Jdeidet Yabous crossing on the Syrian side.

On Friday, the foreign minister warned of the rising tensions between the Lebanese people and Syrian refugees due to the burden the latter is posing on Lebanon, rejecting the establishment of camps for the displaced within the country.

I agree with Derbas, establish camps in the border regions. Enough is enough.

May i add karim under joint lebanese armed force an UN watch?.. I think if assad regime planes comes and bombard those camps the lebanese armed forces wont really tackle the issu so maybe UN will be needed for that, as well as dirrect suppervision by UN may reduce the milions lost on the way between the charity givers and the refugies...

And just a coment about bassil offer to pit camps inside syria:
Imagine under israelly invasion (or attach like in 2006 u put camps in south lebanon like in khiyam for exemple for the lebanese fleeing the bombardments?? A lot of those fled to syria as well as in north lebanon beirut mont lebanon and they were helpd by locals, given shelter, food... So humanity there please, those are people leaving everything behind and trying to same there familly, and bassil wants to make them camps inside syria.. Why not in mazeh?...
Anyway, that's how i see thing...

Anyway, we can't complain that Lebanon has to undergo side effects of the war in Syria while Lebanon officially take part in this war with the implication of Hizbullah -officially part of the Lebanese government and parliament.

Two solutions: Hizbullah out of Lebanon, or else we stop to complain and accept all the refugees from Syria.