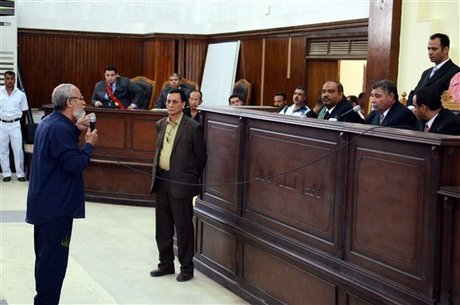 An Egyptian court sentenced Muslim Brotherhood leader Mohamed Badie and 36 other Islamists to life in prison Saturday, and confirmed death sentences for 10 others, most of them on the run.

Badie, convicted of involvement in deadly protests,  had already received death sentences in two other cases in a crackdown on Islamist opposition after last year's military ouster of president Mohamed Morsi.

Of the 10 defendants condemned to death last month in the same case, whose sentences were confirmed, an Islamic cleric has since been arrested.

Another defendant was sentenced to three years.

Egyptian courts have sparked international concern over a spate of death sentences for more than 200 people in several mass trials.

On Saturday, presiding Judge Hassan Farid said the defendants were involved in violence and murder during protests last July after the army overthrew Morsi, who belonged to the Brotherhood.

He said the defendants had committed the violence "to achieve terrorist goals."

The Brotherhood has been designated as a terrorist movement, with much of its leadership imprisoned, including the former president.

Nice. Living and breathing the air on Earth is a privilege and not a right. These and like minded people are a cancer that we should have Zero tolerance and next are the oppressors of any walk of life. The Bengals should have sang "Act like an Egyptian".