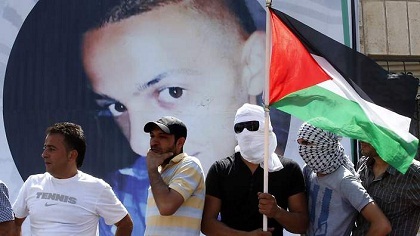 Israel on Sunday arrested a group of Jewish extremists in connection with the kidnap and murder of a Palestinian teenager who was burned to death in a suspected revenge killing.

The brutal murder of 16-year-old Mohammed Abu Khder on July 2 triggered four days of violent clashes which broke out in east Jerusalem and have spread to more than half a dozen Arab towns in Israel, with hordes of angry protesters hurling stones at riot police.

"A number of Jewish suspects were arrested by the Shin Bet and Israeli police before dawn on July 6 on suspicion of involvement in the kidnapping and murder of Mohammed Abu Khder from Shuafat on July 2," Israel's Internal Security Agency said.

Although further details on the suspects identities are subject to a gag order, Honenu, a legal organization which defends right-wing Jewish extremists, said it was representing six people who on Sunday appeared before Petah Tikva magistrates court for a remand hearing.

The court extended the remand of five of them by eight days, and of the sixth -- by five days, a Honenu spokesman said, adding the suspects were being prevented from meeting with their lawyers.

The arrests came as suspicion grew that Wednesday's murder was carried out by extremist Jews in revenge for last month's abduction and murder of three Israeli teenagers in the occupied West Bank.

Tensions were also high in the south on Sunday with Gaza militants firing another 20 rockets and mortar shells over the border, after a night of 10 air strikes.

But Israel appeared determined to contain the situation, with Prime Minister Benjamin Netanyahu urging his cabinet to keep a cool head over how to tackle Gaza.

Initial findings from a post mortem showed the teenager had smoke in his lungs, indicating he was still alive when he was set on fire.

Speaking to reporters, the victim's father, Hussein Abu Khder, said it was clear from the CCTV footage that it was Israelis who had snatched his son.

"I hope the court will put (the perpetrators) away for a long time," he said.

Jerusalem Mayor Nir Barkat spoke with the boy's father by phone, sending his condolences for the "severe and barbaric killing."

The grisly murder has sparked shock, disgust and an outpouring of condemnation from both Israeli and Palestinian leaders.

Palestinian President Mahmoud Abbas said on Sunday he has asked U.N. chief Ban Ki-moon to form "an international investigative committee" to probe Israeli crimes against the Palestinian people, including the teen's murder.

Netanyahu, while visiting the family of one of the murdered Israeli teenagers, sent a message of condolences to Abu Khder's family and pledged to bring the perpetrators of "this shocking crime" to justice.

Violent protests which swept through more than six Arab Israeli towns on Saturday, leading to 35 arrests, around half of them minors, continued on Sunday, police said.

During the evening, around 100 Arab Israelis were demonstrating in the northern city of Nazareth, Israel's most populous Arab town, police said. Two people were arrested.

Further north, police made 14 arrests in Tamra during stonethrowing clashes with police during which flares were fired, a spokeswoman said.

In a related development, a Jerusalem court freed an American boy but ordered him held for nine days under house arrest pending an investigation into stone-throwing allegations.

Tariq Abu Khder, a 15-year-old from Florida on holiday and a cousin of the murdered teen, was arrested on Thursday in east Jerusalem as protests raged, with reports saying he was badly beaten in police custody.

Washington said it was "profoundly troubled" by the reports, prompting the Israeli justice ministry's police investigations department to begin an urgent probe into a video clip showing border police beating and kicking a handcuffed semi-conscious figure on the ground.

Meanwhile, Netanyahu demanded his cabinet keep a cool head about growing tensions in and around the Gaza Strip where militants have stepped up rocket fire in the past three weeks, prompting demands for a new military operation in the coastal enclave.

So far, Israel has responded with air strikes, killing three militants, but Netanyahu has resisted calls for tougher action.

"Experience has proved that at moments like this, we have to act responsibly and with a cool head and not with harsh words and impetuousness," he told the weekly cabinet meeting.

Good, keep it in the family between the tow of you.

In Israel, a murderer will see it's day in court, even if he is Jewish, while in Lebanon the Hariri murderers still walking free, and the Pals have a price money on every Jewish head, and naming public building after mass murderers and suicide bombers of civilians.
Israel should stop deluding itself that it can ever have peace with these savages!!!

In Israel, every public leader has blood on their hands and your previous generations were wanted terrorists. Don't preach about your lofty legal system that treats non-Jews as second last citizens.

Palestinians are doing whatever is in their power to gain their freedom. And no I don't condone killing civilians but look at the stats, Israel has by far killed more civilians since 2000 than Hamas or any other organisation has.

bigjohn, Do you factor in the Palestinian politicians and/or the parents of the 1516 dead Palestinian children in your claim? Yes it is deplorable, and, at the same time, each side must set aside their unworthy beliefs so that they do not diminish theie power and ability to have self control, doubt where it is justified and fairly balance the need for peace over war. One's action is based on his/her beliefs. If the belief is misguided, then the actions are less likely to succeed. There is the scenario where these two cultures can exist in harmony, but it is up to them to come to the realization that they are ready and seek help from those nations who can deliver and make it happen. Lebanon is not a major decision maker in this conflict. We need to find a way to rid ourselves of their camps and their refulsal to make peace with Israel for the sake of the Palestinians children and their own future.

Today, Israel is a key ally of those righteous Sunnis vis-a-vis Iran. They have compelling reasons not to find a solution for the Palestinian problem and/or step on the toes of Israel.

They've given billions to the Palestinian cause but most were swallowed up by Arafat and his thieves. Unfortunately the Palestinians have not helped with themselves over the years. They were let down by their leaders like the rest of the region.

I prefer the term Terrorists. There is no difference whether its Muslim, christian or Jew.