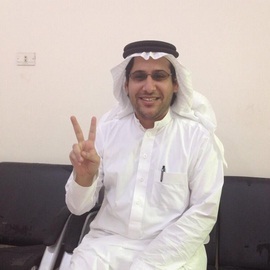 A Saudi court on Sunday sentenced to 15 years in jail a prominent rights lawyer described by Amnesty as a prisoner of conscience, relatives said in a statement posted on Twitter.

The tweet said that Waleed Abulkhair, who has had many run-ins with the authorities over his activism and for allegedly insulting authorities, was also banned from traveling abroad for 15 years and fined 200,000 riyals (around $54,000).

Abulkhair, who has been under arrest since April 16, contested the verdict in court, according to the tweet.

On bail for having held unauthorized meetings of reformists, Abulkhair was ordered to be put under arrest as he attended a fifth hearing, accused of insulting authorities in the ultra-conservative kingdom.

His wife Samar Badawi announced his arrest the next day and said the court did not give her a reason for detaining him.

Rights group Amnesty International at the time called for his immediate release, saying he was being clearly punished "for his work protecting and defending human rights."

"He is a prisoner of conscience and must be released immediately and unconditionally," said Amnesty's Said Boumedouha.

He called the lawyer's detention "a worrying example of how Saudi Arabian authorities are abusing the justice system to silence peaceful dissent."

He is already facing other trials in cases linked to his activism.

In October, he was sentenced to three months in prison for "insulting the judiciary" and a petition he signed two years ago criticizing the authorities.

That same month he was briefly held for setting up an "unauthorized" meeting place where pro-reform activists gathered, but was later freed on bail.

In June 2012, he was accused of "disrespecting the judiciary... contacting foreign organizations and signing a petition demanding the release of detainees," some of whom were being held for suspected terror links, his wife said at the time.

Three months earlier, authorities banned him from traveling to the United States where he was due to attend a forum organized by the State Department.

And in February 2011, he signed two other petitions demanding political reform in the kingdom, where political parties are banned.

Abulkhair set up a group on Facebook -- Monitor of Human Rights in Saudi -- which has thousands of members.