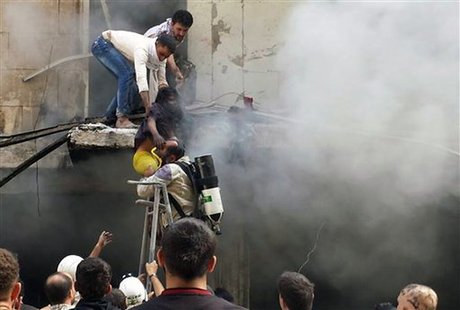 The opposition Syrian National Coalition said Sunday that regime forces are preparing to launch a major assault on rebel-held areas of the northern city of Aleppo.

The group's leadership, meanwhile, was meeting in Istanbul to elect a successor to SNC chief Ahmad Jarba.

"The military situation is very difficult, the siege of Aleppo has become a reality," coalition spokesman Luay Safi said on the group's website.

"Syrian troops are preparing to invade Aleppo," he said.

Aleppo, once Syria's commercial hub, has been divided since a July 2012 rebel offensive. Government aircraft have been targeting opposition-held areas there as well as nearby towns and villages.

The assault began in mid-December and intensified in January, with helicopters raining down barrels bombs, causing a massive exodus.

Regime troops have made advances since last week, taking control of most of the industrial district in northeastern Aleppo and threatening to cut off rebel supply lines.

On Sunday, pro-government daily al-Watan said loyalist troops were on the verge of "another breakthrough" by routing rebels from a military academy in the city's northeast.

Rebels fighting to topple Syrian President Bashar Assad control eastern parts of Aleppo and some districts in the north.

Loyalist forces are mostly in control of southern districts of Aleppo as well as some western areas.

Opposition coalition spokesman Safi charged that government forces around Aleppo were acting in collaboration with the jihadist Islamic State.

He condemned the West's failure to support the rebel Syrian Free Army, which is fighting both Assad's forces and IS.

"To this day the United States is preventing the dispatch of sophisticated weapons to the Free Syrian Army to fight Assad's terrorism and radical organizations," he said.

IS has seized large swathes of territory in Syria and neighboring Iraq, declaring the land it holds to be an Islamic "caliphate", and its leader the ruler of all Muslims.

With government forces also on the offensive, SNC official Bahiya Mardini told Agence France Presse that the opposition at their meeting in Istanbul would elect a new president on Monday.

the moderates are attacked from one side by the regime army and from another side by the EI. The EI can only be the ally of the regime as so far no combat has been recorded between the regime and the EI. more over it is a known fact that many EI leaders were in the assad prisons and were freed at the beginning of the syrian civil war.
Two weeks ago, when EI made significant advances on the ground in irak and on the iraku and syrian border, it was reported in the news that the assad air force has conducted raid on border areas held by EI. However, eye witnesses on the ground reported that the air plane did not bomb EI forces but dropped their bombs away from EI positions.
EI seems well a well thought off iranian setup to cut through the moderate arab societies, to strengthen extremism and justify the intervention of iranian led shiism response.

Hey greatpierro,
Do you have any update on September 11 2001 attackers.
According to your same eye witnesses in Iraq, they spotted Syrian jets dropping 19 Saudi nationals that day on the World Trade Center.

Since Sunni-Wahhabi do not terrorize and kill, do you have any news about the Rouche Hotel attackers? According to your eye witnesses from Iraq and WTC, who happened to be in Beirut that day, Hizballah brought 2 Saudi nationals strapped them with suicide bombing vests and remotely blow them up.