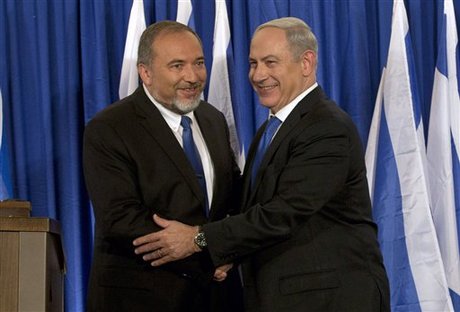 Israeli Foreign Minister Avigdor Lieberman on Monday ended a 20-month political alliance between his party and the ruling rightwing Likud, although his faction will remain in government.

The decision was announced at a press conference after a bitter dispute between Lieberman and Prime Minister Benjamin Netanyahu over the government's handling of intensifying rocket fire by militants in the Gaza Strip.

Lieberman, who heads the rightwing nationalist Yisrael Beitenu had formed an electoral alliance with Netanyahu's Likud in October 2012 ahead of a January 2013 election, in a move they said would enable them to better face security challenges.

The new bloc, which was quickly dubbed Likud Beitenu, won a narrow electoral victory, taking 31 of the Knesset's 120 seats, just 12 more than its closest challenger, the centrist Yesh Atid party.

But following a dispute with Netanyahu over Gaza, which saw Lieberman pushing for a full reoccupation of the territory, the minister decided to end their electoral alliance.

"It's no secret that there are fundamental disagreements which no longer allow us to work together, so we have advised the Knesset committee that we are separating and setting up a separate faction," he said.

It was not immediately clear how many seats each faction would hold.

Lieberman also commented on ongoing rocket fire from Gaza, which has been steadily increasing over the past three weeks, although Israel has so far taken only limited measures in response, with Netanyahu on Sunday urging his ministers to "act responsibly."

"In Operation Pillar of Defence, Israel made significant achievements: from the liquidation of Hamas's military chief of staff to the destruction of 95 percent of its long-range missiles," Lieberman said, referring to the last major Israeli operation in November 2012.

"Today, they now have hundreds of missiles with a range of 80 kilometers (50 miles)," he said.

"This reality in which we live -- with hundreds of missiles held by a terror organisation which could decide to use them at any moment -- is unacceptable.

"It is not clear what we are waiting for."