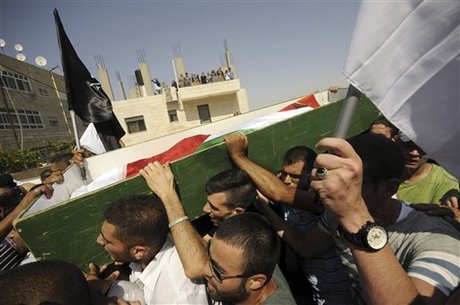 The involvement of Jewish extremists in the brutal murder of a Palestinian teenager has forced Israel to confront the growing danger of violently anti-Arab narrative peddled by the far-right fringe.

"It is a scenario in which the Israeli-Palestinian conflict turns into a tribal battle between two communities according to the biblical formula of an eye for an eye, which is likely to leave in its wake destruction, ruin and scorched earth on both sides."

Shin Bet is leading the inquiry into the murder of Abu Khder, whose charred body was found in  woodland on Wednesday morning, shortly after he was kidnapped from annexed east Jerusalem.

Initial post mortem results showed he was still alive when they set fire to him.

Six Jewish suspects, three of them minors, were arrested early on Sunday in connection with the killing -- which is believed to be a bloody act of revenge for the murder of three Israeli teenagers in the West Bank last month.

Three of them have confessed to the murder, a source close to the investigation told Agence France Presse on Monday.

Israel press reports have suggested the involvement of two groups: "La Familia", a gang of extremist football fans who follow Beitar Jerusalem and are known for their virulently racist outbursts, and Lehava, a far-right group which campaigns against intermarriage, particularly with Arabs.

Both groups are active on social media, with La Familia boasting 13,000 "likes" on Facebook.

Other extremist groups maintain a much lower profile, such as the so-called hilltop youth, a group of hardline nationalist settlers known for seizing hilltops in the occupied West Bank in order to establish new unauthorized settlement outposts.

They are also believed to be behind a growing wave of racist, anti-Arab vandalism, euphemistically termed "price tag" attacks which initially began as a reaction to state moves against the settlements but has morphed into a much broader expression of xenophobia.

Ideologically, such groups take their inspiration from Kahanism, a racist anti-Arab ideology espoused by Rabbi Meir Kahana whose Kach party and another offshoot were banned in 1994 after one of its members gunned down 29 Muslims in a Hebron mosque.

For months, ministers and former intelligence chiefs have been pushing the government to clamp down on Jewish extremists, and declare those responsible for "price tag" violence "terrorists".

But their calls have fallen on deaf ears, with the government agreeing only to declare the perpetrators as being in an "illegal organization."

Following the discovery on June 30 of the bodies of the three Israeli teenagers who had been abducted and killed by militants 18 days earlier, senior ministers were quick to fire off a string of belligerent statements, prompting accusations they had poured fuel on the already smoldering fire among extremists.

"They were kidnapped and murdered in cold blood by human animals," Prime Minister Benjamin Netanyahu said.

"Vengeance for the blood of a small child, Satan himself has not devised," he said, quoting the poet Haim Nahman Bialik.

Twenty-four hours later, more than 200 Jewish extremists took to the streets of Jerusalem, screaming "Death to Arabs!", dragging people out of cars and storming the light rail system in what one witness described as "a pogrom."

Several hours later, Abu Khder was snatched before dawn as he went to the mosque to pray, with his burnt body found by police shortly afterwards.

Israel's justice ministry has since launched a major crackdown on online incitement to hatred, opening a public hotline.

But there has also been an outpouring of shock and disgust by Israelis, both online as well as in the traditional media.

"And perhaps the incitement we have been seeing for the past week on the social networks, and the tens of thousands of 'likes' received by each call for revenge, for murdering Arabs -- maybe that is our face," wrote Sima Kadmon in the top-selling Yediot Aharonot newspaper.

"Perhaps something bad has happened to us as a society, and without having noticed, hatred, racism, violence and extremism have taken over our lives like a malignant disease, from the price tag actions to the calls on the streets and on the social networks to murder Arabs."

One of the first to denounce the killing as "horrendous" was the family of one of the murdered Israeli teenagers.

Since July 2, there have also been many demonstrations against racism and revenge in Jerusalem, Tel Aviv and Haifa.

And in the West Bank, influential settler rabbi Elyakim Levanon said Abu Khder's killers should be put to death, along with those who murdered the three Israeli youths.