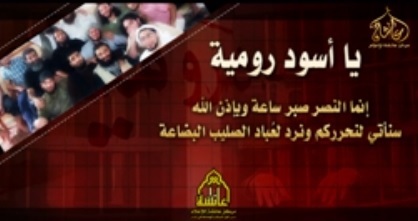 Self-proclaimed caliph Abu Bakr al-Baghdadi has vowed to release Muslim “hostages” from jails in Arab countries, including Lebanon, and promised to “liquidate their butchers.”

According to a video posted on YouTube on Sunday, the shadowy jihadist said the “butchers” include judges, security forces and guards.

Al-Baghdadi heads the Islamic State (IS) group, which led a lighting offensive in Iraq that has overrun swathes of five provinces north and west of Baghdad.

A text appeared in the video, accusing the Lebanese state of being a U.S. and Israeli ally.

It also showed Mohammed Zwawi, a Palestinian-Syrian, who claimed that he is an inmate in Roumieh, Lebanon's largest prison.

The video was allegedly shot at Roumieh's bloc B.

Zwawi has been sentenced to death over his involvement in the fighting between Fatah al-Islam militants and the Lebanese army at the Palestinian refugee camp of Nahr al-Bared in 2007.

Last week, the emir of the al-Qaida-linked Jabhat al-Nusra in al-Qalamoun promised in an audio message to free Islamist prisoners in Roumieh “within days.”

The threats come amid strong measures taken by security forces and the army around Roumieh over an alleged plot to carry out a truck bombing and a plan by prisoners to escape from the facility.

The authorities have announced the arrest in the past weeks of several suspected terrorists plotting to carry out suicide bombings in Lebanon.

Previous attacks have been claimed by extremists, who have vowed to carry out more assaults to avenge the presence of Hizbullah fighters in Syria.

who the heck cares about this terrorist!? why are his rants featured every single day in the spotlight??? thanks naharnet, i'm sure he's enjoying all this attention and publicity

most of them have been waiting for a trial for a far longer time they should serve if they are guilty.

if they are guilty they should hang, so yea, maybe they wouldnt have stayed that long in jail.
so i agree, judge and hang them now, make space in roumieh for the next batch

I would not mind people like you taking their place in Roumieh.

even this was censorred!? someone put a leash on that moderator

"diverging opinion, i hear they do that in the apartheid state of iskhael"

Thank you Geha for reminding us where your loyalty is, your blind hatred of Hezbollah, although justified, is reckless and stupid. Dont defend Islamist scum, your Roumieh friends should all be hanged and killed immediately, they attack the Army they dont deserve a fair trial, did they give fairness to the innocent soldiers they killed? You Islamists have always been traitors and still are.

I am always aligned wi your thoughts but for an idiot to fight and kill LAF then leave them hanging and screw them because first they are Palestinians visitors and second because they were born in Syria which makes them double visitors. So freedom they do not deserve.

I have the feeling that this so called Caliph will have the same scenario as Assir. Becoming famous and well covered by the press, then a sudden fall or disappearance.

Lebanon is your grave Calipho... yalla try and see for yourself!
before you many has tried to invade us starting with abuammar and where r they now?

Those crazy kids and they social medias LOL, get a job darnit instead of playing with the computers.

Bring it on lions!!! hehehe

No fair, there's only one patented "Je veux être calife à la place du calife" and GMA holds the patent, did this guy get his permission to call himself calife?

these jihadists look like something out of a movie depicting an ancient primitive atmosphere; their ideology is also on par with how they look. i find it mind boggling such a barbaric breed exists. these neanderthals are a threat to nobody but the innocent, unarmed and themselves.

Hang them before our EX PRIME MINISTER pays all their duties and let them out.. I believe Mr. Mikati should apply for the next Caliph of ISIS since Mr. Baghdadi applied first and took his place for the moment.

just to be clear, anyone who declares himself a caliph in 2014 is out of his mind.

Perhaps the Caliph would be pleased to rule his caliphate from within Roumieh.

All, a big game is being played in the Arab World... Oil is about to dry up and not needed very soon... So it was time to gather all these people in one area, give them some life line and hope then wipe them... This is the plan...

When you fire at these Islamic filth, make sure that they are uprooted from the face of the Earth. If you can read between the lines and know what I mean.

Does this Caliph know that there is a special forces(Maghaweer)barracks near Roumieh prison. Does he know what will happen when those special forces guys are unleashed on any terrorists?