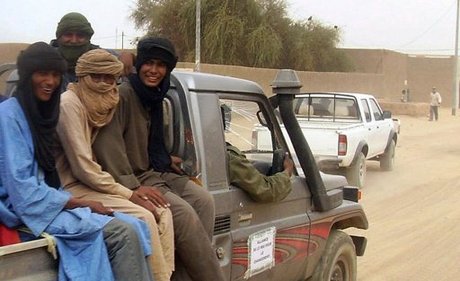 Mali's most radical Tuareg rebel chief, who never agreed to disarm, died in an accident late Friday, his family said, but observers suggested the death could be linked to the unfolding chaos in Libya.

Ibrahim Ag Bahanga never totally joined in north Mali's peace process that resulted from a 2006 accord between the Malian government and Tuareg rebels, who have been fighting sporadically since the 1990s.

In 2009, Bahanga briefly fled to Libya after a crackdown on his group by the Malian army and he was thought to have significant contact with the Libyan army.

But observers suspect that Bahanga had in recent months been providing weapons to the Libyan rebels, who this week all but vanquished strongman Moammar Gadhafi.

While Bahanga's allegiances in Libya were partly unclear, security sources told Agence France Presse in March that Gadhafi had recruited as mercenaries some 800 Tuareg fighters from various countries, including Mali, to quash the uprising against his regime.

Family member Bay Ag Alhassane told AFP that Bahanga died in an accident in the northeast of Mali, but one diplomat from a country bordering Mali suggested the death could be linked to a clash of loyalties in the Libyan conflict.

"Did he die from an accident or from a settling of scores with the Tuaregs who are fleeing the Libyan front? It begs the question as to whether there was a leadership struggle" within Bahanga's Tuareg faction, the diplomat, who requested anonymity said.

"The death of Ibrahim (Bahanga)... is a double-edged sword. It is first a chance for peace. He was radical," a development worker based in northern Mali told AFP.

But the development worker, who did want to be named, added that a power vacuum inside a well-armed Tuareg rebel faction could also create further instability.

Bahanga had several times before his death voiced interest in peace, but his commitment to ending the fight was always found wanting.

The Tuareg community is composed of some 1.5 million people spread across Algeria, Burkina Faso, Libya, Mali and Niger and various Tuareg rebel factions have been fighting governments in the region for more than two decades.